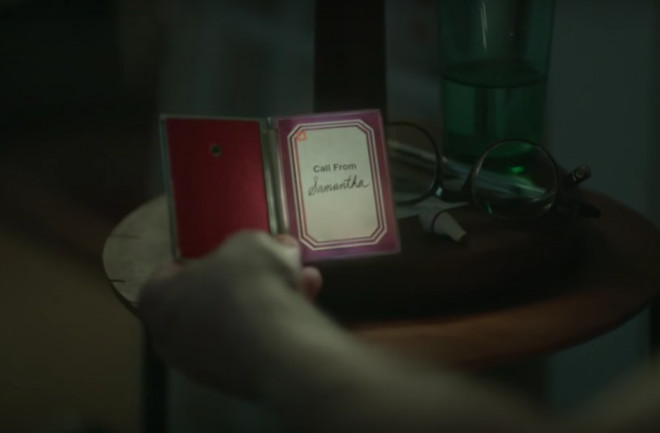 An artificial intelligence named Samantha strikes up a relationship with a man named Theodore in the 2013 film "Her." Credit: Warner Bros. Pictures In Japan, the seaside resort town of Atami has served as a vacation spot for couples consisting of real men and their virtual girlfriends from the video game series "Love Plus." But a recent survey of future predictions for the year 2036 shows that a majority of American respondents doubt virtual lovers such avatar girlfriends and boyfriends will become commonplace within two decades. Americans seem especially skeptical about the 2036 predictions involving robots, virtual lovers and artificial intelligence. Other predictions deemed "not likely" by a majority of Americans surveyed include the idea of robots outnumbering humans and the first artificial intelligence (AI) machine taking a seat on the board of a major company. The findings came from a survey commissioned by London & Partners and conducted by MG Insight/ YouGov that used a scientific sampling method to get a representative sample of about 2,000 U.S. adults. There may be good reason to be skeptical of some of the expert predictions made by the Imperial College London’s Tech Foresight research team at the annual Tech Foresight showcase event from 2015. What follows is a quick look at the state of the technologies involved in making those robotic and AI predictions come true.

When the Metal Ones Come for You

The prediction deemed "not likely" by the largest majority of Americans surveyed involves the idea of the robot masses outnumbering humans by the year 2036. A resounding 64 percent said that was "not likely" versus just 26 percent that said it was "likely." 10 percent said they were unsure. Getting exact figures on the number of machines that could be counted as robots can be tricky. One partial measure comes from the International Federation of Robotics that keeps track of industrial robot sales involved in manufacturing. In 2014, a total of 229,000 industrial robots were sold across the world. In terms of density, South Korea had the most industrial robots with 478 robots for every 10,000 human employees. Industrial robot sales have more than doubled over the past 10 years and will likely continue to rise in the next 20 years, but it seems unlikely that industrial robots alone would become so numerous as to outnumber humans by 2036. https://www.youtube.com/watch?v=rL6RRIOZyCM Consumer robots intended for homes seem likely to have a much bigger impact. These include the household cleaning robots such as iRobot's Roomba vacuums and the many toy or educational robots designed for kids. A report by the research firm Tractica estimates that annual sales of consumer robots will reach 31.2 million by 2020, compared with just 6.6 million consumer robots sold in 2015. Such rapid growth rates could mean annual sales of hundreds of millions of consumer robots within the next two decades. The human population will also keep growing. In 2015, a United Nations report estimated that the worldwide population would reach 8.5 billion by 2030 alone. But the robots to humans count might prove more interesting for individual countries in the future. For example, technologically advanced countries that also happen to have aging populations and flat or falling birthrates--such as Japan and South Korea--may also end up employing much more industrial robots to man the factory lines, service robots to deal with customers, and caretaker robots in homes and hospitals. Even if robots do not technically outnumber humans by 2036, it's almost certain that humans will find themselves surrounded by an incredibly diverse array of robots. For example, self-driving cars being developed by Google and other companies will likely become one of the more common robots that people encounter in their daily lives in the not-so-distant future.

If You Wanna Be My Virtual Lover

An artificial intelligence voiced by Scarlett Johansson becomes the virtual lover of Joaquin Phoenix in the 2013 film "Her." But Hollywood's science fiction tales do not seem to have convinced Americans that virtual girlfriends and boyfriends will become a common trend by 2036. Just 35 percent said it was "likely" that avatar girlfriends and boyfriends would be commonplace. By comparison, 47 percent said it seemed "not likely." The question also had the most "not sure" responses from people with 18 percent being uncertain. It's a little unclear how the survey defines an "avatar girlfriend" or "avatar boyfriend," but let us assume it means a virtual agent in the form of a video game, mobile app or online service. Such a virtual lover may or may not actually be very intelligent, but current evidence suggests that actual intelligence may not matter as long as the interaction with humans proves convincing enough. https://www.youtube.com/watch?v=XsQqMwacZQw Indeed, humans already have the capacity to show great platonic affection to anything that shows even the barest semblance of life. The human affection for crude robots has been so great that some Japanese owners of AIBO robot dogs have requested funeral services for their broken machines. Similarly, there have been reports of U.S. soldiers giving their military robots a full funeral with military honors and a 21-gun salute. In China, there have been news reports of a Microsoft chat bot called Xiaoice becoming the friend and confidante for millions of Chinese social media users who exchange messages with "her." Xiaoice's artificial intelligence software has enabled the chat bot to have more than 10 billion conversations with people so far, according to a Nautilus Magazine story. Many people share their darkest fears and most closely-guarded hopes and dreams during these conversations with Xiaoice. It's probably easier for most people in this day and age to imagine these virtual agents as friends than lovers. And it's not hard to see how the immaterial nature of avatar girlfriends or boyfriends would limit their appeal as lovers for a majority of people, even if their artificial intelligence becomes incredibly sophisticated. But perhaps the survey would have come up with different results if it had asked about humans taking robots as boyfriends or girlfriends in 2036.

Today's artificial intelligence usually only manages to impress people when it defeats a master human player in the ancient game of Go. But one survey question considered the futuristic scenario of an AI machine sitting on the board of directors for a major company and calling the shots on corporate management decisions. Americans seemed generally dubious of the idea that an AI would directly wield such decision-making power in the business world by 2036. Almost half of the survey respondents (48 percent) said the scenario seemed "not likely." Another 39 percent said it was "likely" an AI could achieve such a position. 13 percent responded with "don't know." If such a scenario ever occurred, it would imply at least two things. First, AI would have become sophisticated enough in its capabilities to efficiently manage the typical responsibilities of a corporate board member. Such responsibilities can vary depending on whether the company is private or public, but generally this means the AI should be able to help assess and select leaders such as CEOs to run the company. An AI serving as a corporate board member would also probably need the skills to consider the overall business strategy of the company from a big picture perspective.

London & Partners commissioned SMG Insight/YouGov to survey a sample of 2,088 American adults on their attitudes to a series of technology predictions to happen by 2036. The statements were inspired by a series of predictions put forward by Imperial College London’s Tech Foresight research team. Credit: London & Partners Second, humans would need to trust the AI's capabilities enough to either elect or appoint the AI to sit on the board of directors. Trust in AI or robots can prove something of a minefield; both too little trust and too much trust can prove detrimental under different circumstances. But at least the board of directors could feel a bit reassured knowing that the first AI board member would be balanced out by all the human board members. There have been plenty of reports considering how the rise of AI and the general automation of jobs will affect human careers. Still, a wide range of disagreement exists over just how big an impact the rise of AI will have on the various jobs held by humans. Nobody can confidently predict exactly how advanced AI will have become by 2036 in terms of its capabilities compared with humans. In any case, some experts have argued that it's important to begin taking steps to prepare for the rapid evolution of AI and robots and soften any potential blow for human societies and workers. For more details on the future predictions survey, see the original press release here. To read more about the predictions that Americans generally thought seemed "likely" to come true, head over to this link and prepare yourself for future pizza delivery by drones.