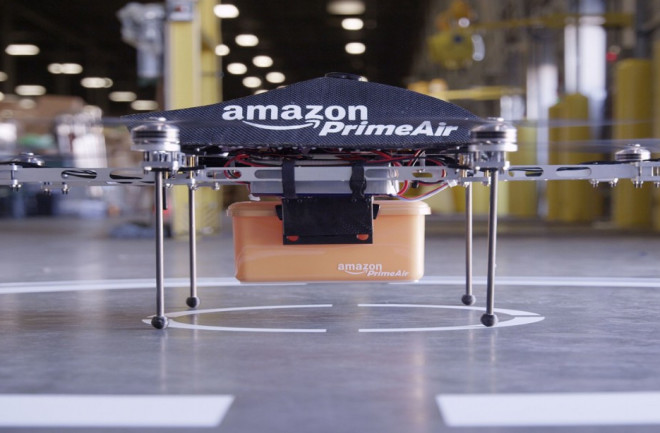 An early Amazon delivery drone prototype. (Credit: Amazon) As the drone industry continues to gain momentum in the United States, some big-name companies are vying to rule the skies. On Tuesday, Amazon — the company that wants drones to deliver goods within 30 minutes of placing an order — unveiled a bold plan to carve out a chunk of airspace that would serve as a fast lane for commercial drones. Amazon’s experts believe this is the best way to accommodate tens of thousands of drones that will be buzzing over our heads in the coming decade.

Life In the Fast Lane

Amazon’s aeronautics experts presented their plan at a NASA convention in California aimed at generating novel ideas for managing drone traffic as more and more unmanned systems inevitably take to the skies. Amazon’s plan, outlined in two new papers, would allot airspace for high- and low-speed traffic. Slower drones not equipped with sophisticated navigation and avoidance technology, such as those used for videography and inspections, would be allowed to fly up to 200 feet in the air. The airspace between 200 and 400 feet would be reserved for high-speed drones equipped with sophisticated flight systems — basically drones flying with little to no human intervention. The airspace between 400 and 500 feet would be a designated “No Fly Zone” to prevent encounters with manned aircraft also sharing the skies. A defined set of performance standards would be used to determine if a drone used the slow or fast lane.

Amazon's proposal would create a fast lane for drones equipped with sophisticated autonomous navigation systems. (Credit: Amazon) Amazon’s proposal has already raised the eyebrows of amateur drone pilots. Currently, hobbyists can fly drones up to 400 feet in the air, so long as they remain within sight and are not flown in restricted airspace. But if Amazon has its way, hobbyists would be stripped of half their allotted airspace. Brendan Shulman, who has 20 years' experience building and flying drones for fun, says it’s important for regulators to proceed with caution. “That’s currently by far the most common use of the technology, so before you disrupt their experience you want to think carefully about what slice of airspace would really be needed by these new technologies,” Shulman told The Guardian.

Amazon isn’t alone in proposing a framework to control drone traffic. More than 14 companies, including Google, Verizon Communications Inc. and Harris Corp., are all working to develop a large-scale air traffic control system that would prevent drones from smashing into each other. Universities across the country are also working on solutions for drone traffic. Essentially, a drone traffic control system would keep constant tabs on every drone in the sky. Any proposed system would work under the assumption that all vehicles would reliably connect to the network to identify themselves and their location. According to Bloomberg, there’s plenty of incentive for the companies to design an ideal system: “To the winners will go a foothold in an emerging multibillion-dollar economy of unmanned flying machines.” The race is officially on, and it will undoubtedly be exciting to watch.