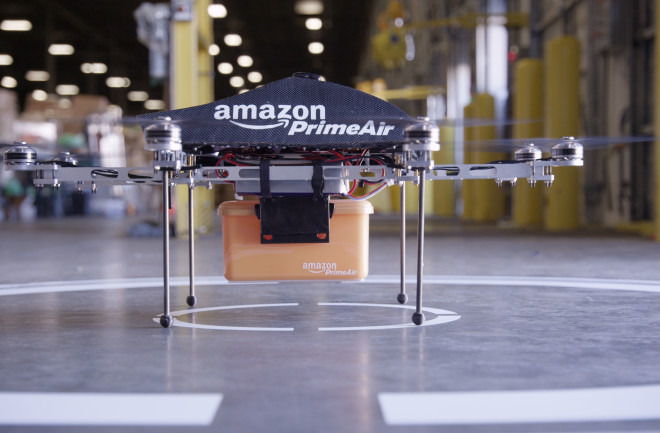 An Amazon delivery drone prototype. (Credit: Amazon) When the Federal Aviation Administration released its draft regulations for commercial drone flight last month, it appeared Amazon’s ambitions to launch a drone delivery service were effectively grounded. But things aren’t always as they appear, and the Internet retailer’s delivery drones may still have a fighting chance. On Thursday, the FAA issued Amazon a special “experimental airworthiness certificate,” which allows the company to conduct outdoor research to test its fleet of delivery drones.

The FAA’s new ruling adds Amazon to the list of commercial operators allowed to fly drones. According to USA Today, "the agency has granted 48 petitions through Friday for purposes such as movie-making, smokestack inspection, agriculture and aerial photography. But hundreds more applications are pending, as the industry urges faster regulatory action." Amazon will be allowed to fly its drones outdoors for the purpose of research, development and crew training. The certificate requires Amazon to provide monthly research data to the FAA as well as the number of flights conducted, pilot duty time per flight, hardware and software malfunctions and any unintended loss of communication between controller and drone. However, the certificate still contains one pesky roadblock: the drone must always remain within the visual line-of-sight of the pilot and another observer. The line-of-site regulation is the same that appears in the FAA's current draft of regulations that were released in February. This limitation would make it impossible to deliver a package more than a few hundred feet. In other words, Amazon has a long way to go before launching a network of drones that can deliver packages within 30 minutes.

A year ago, Amazon threatened to move its research operations overseas if the FAA didn’t allow its drone research to move forward in the United States. In December, Paul Misener, Amazon’s vice president of global public policy, expressed his concerns in a letter to the FAA. The letter stated, according to the Wall Street Journal:

Without the ability to test outdoors in the United States soon, we will have no choice but to divert even more of our [drone] research and development resources abroad. I fear the FAA may be questioning the fundamental benefits of keeping [drone] technology innovation in the United States.

And according to The Verge, Amazon has already embarked on research operations abroad. Last year the company began testing its drones in Cambridge, England. But the promise of drone delivery on demand, for the company's American customers, will have to wait for now.