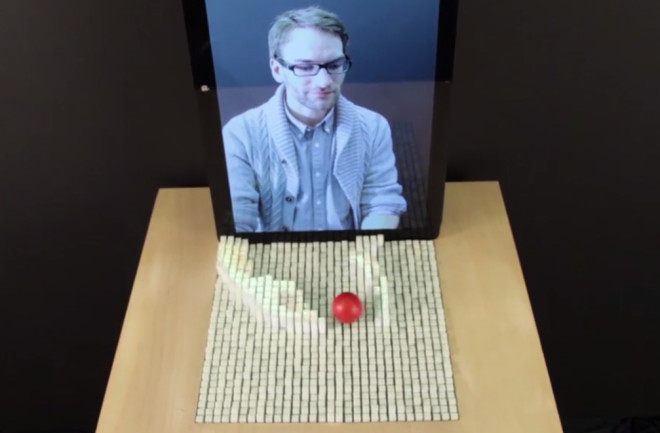 inFORM may be the future of remote ball-rolling. Image credit: MIT Tangible Media Group The future of the Web, it seems, is not just sending data but transmitting actions. Telepresence robots and remote-control drones already let an internet user in one place control far-off gadgets in the physical world. Now another such device has emerged on the scene---a dynamic display that transmits 3-D shapes from the sender to the receiver. The device is called inFORM, a "dynamic shape display" developed by researchers at MIT. Think of it as a long, wireless line of communication. On the receiving end of this line is a surface comprised of 30 by 30 pins. Each pin has a tiny motor attached to its base, which can move it up and down independently of the 899 others. On the other end of the line, a depth-sensing camera records physical objects or movements and sends that information to the motorized surface. Each of the pins acts as a three-dimensional pixel to recreate that information in a physical form. It essentially makes the 3-D vision pop up from the surface. This may all sound kind of confusing and obscure, but think of it this way: it's like a cross between Skype one of those bizarre, '90s pin-art toys.

Hi Mom! Look at my face! Image credits: bloomua/Shutterstock and Heather Katsoulis/Flickr The list of potential applications inFORM's developers foresee is nifty and far-reaching: from 3-D visualizations of CT scans, via interactive terrain models for urban planners, to long-distance design sessions between collaborating architects. But to make these applications practical, the resolution will need to be ramped up significantly. Future iterations of inFORM will have to include far more pins and far greater control. As described in The Verge,

It's extremely impressive stuff, but it's just one step on a long path to what MIT calls Radical Atoms. First conceptualized over a decade ago, Radical Atoms are what MIT believes will be the future of interactivity. The idea is that we presently interact with computers through graphical user interfaces (GUI), while inFORM and other projects like it offer up a tactile user interface (TUI).

In a video showing how it works, researchers roll a ball, display 3-D visualizations of math equations, and even come up with a pretty clever mobile ringtone. Watch the video yourself to see how it works: http://vimeo.com/79179138 Video credit: MIT Tangible Media Group