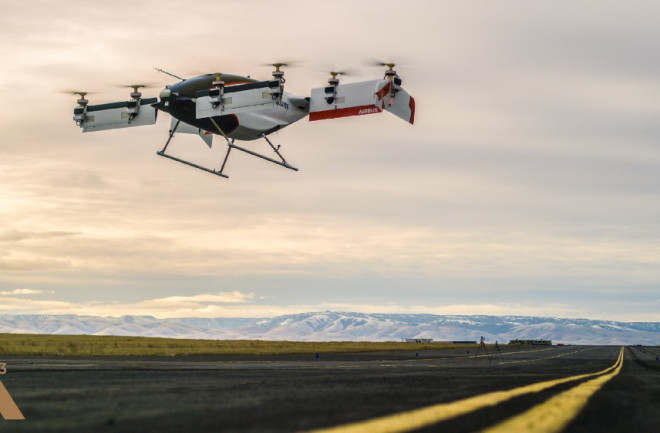 (Credit: Airbus) Airbus first announced its plans to create a self-flying taxi service in 2016. On Jan. 31, after two years of planning and building, it proved it isn’t just a pipedream — the Vahana successfully completed its first flight test. The full-scale aircraft flew fully autonomously for 53 seconds at an altitude of 16 feet (gotta start somewhere) at its testing grounds in Pendleton, Oregon. It conducted another flight the following day, which seems to have gone well, too. The FAA was in attendance of the flight tests. “Our goal is to democratize personal flight by leveraging the latest technologies such as electric propulsion, energy storage, and machine vision,” Zach Lovering, Vahana project executive, wrote in a Medium post. Only one person can fit in the electric VTOL (vertical takeoff and landing) drone. It measures about 20 feet wide, 19 feet long, 9 feet high and weighs more than 1,600 pounds. Discover has reported that Uber is looking to add self-flying aircraft like these to their services — allowing people to catch an on-demand flight to wherever their destination may be. Sure sounds a lot better than sitting is bumper-to-bumper traffic. The Volocoptor is another self-flying taxi that recently made its maiden public voyage in Dubai. Watch it fly here.

Two years ago, Vahana was just a lofty idea. Yesterday it flew for the first time. Thank you, @VahanaAero team, for the proudest moment of my career. Good luck, Alpha One, in your future flights. https://t.co/QwJnwNq6QI#AvGeekpic.twitter.com/jrXNENtNHd