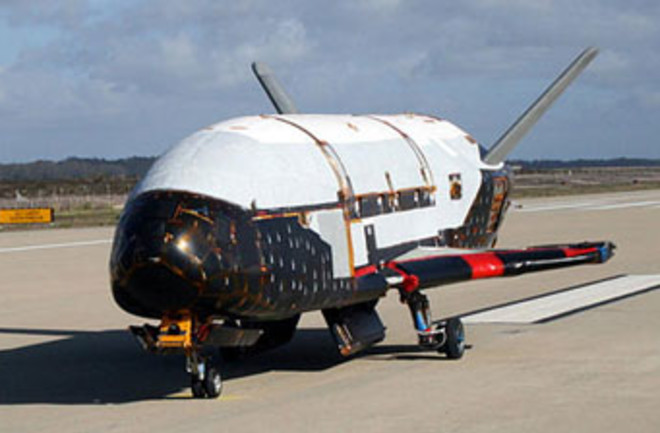 When it comes to keeping secrets, the U.S. Air Force knows how to stay mum. On Thursday, the Air Force will launch its secret space plane, the unmanned X-37B aircraft, from Cape Canaveral. The project has been a decade in the works and cost millions of dollars to develop--but we civilians have little idea what it's for. Once launched via an Atlas V rocket, the plane is expected to spend days or weeks orbiting Earth and performing classified experiments before landing back in California. If successful, the launch will fulfill the Defense Department's long-time dream:

the orbital flight of a military vehicle that combines an airplane's agility with a spacecraft's capacity to travel in orbit at 5 miles per second [Popular Mechanics].

The project itself has had an interesting past. It was begun by NASA in 1999 but was later adopted by the Defense Department, and was first placed under the auspices of DARPA before finally finding a home with the Air Force. The Air Force immediately threw the X-37B behind a veil of secrecy, leading some experts to speculate that this could be the military's attempt to weaponize the final frontier. There are also concerns that the mysterious project could set off an orbital arms race with countries like China. The 29-foot-long delta-wing spacecraft looks like a miniature version of a space shuttle. The unmanned X-37B is capable of cruising around the globe for more than nine months at a stretch, experts say, keeping close tabs on targets below and monitoring the space above. Its small size and simplicity are great assets to the military, because they'll allow for the aircraft's quick deployment in emergencies. Theresa Hitchens, a space policy expert and director of the United Nations Institute for Disarmament Research says the X-37B might be intended to be an orbital first responder.

, she says. Though the air force has been mum about the space plane’s potential uses, experts speculate it could conceivably be used as a bomber.

The craft could fly over targets within an hour of launch to release cone-shaped re-entry vehicles that would both protect and guide weapons through the atmosphere. A craft the size of the X-37B could carry 1000- or 2000-pound re-entry vehicles armed with precision munitions like bunker-busting penetrators or small-diameter bombs, or simply use the explosive impact of kinetic rods cratering at hypersonic speeds to destroy targets. [Popular Mechanics].

When the first X-37B returns to Earth,

scientists will determine how many of its components survived the flight and how long it will take to get the craft back into the air. The shorter the turnaround time, the better, since that would mean fewer X-37s would have to be built, regardless of its ultimate mission [The Christian Science Monitor].

For now, the Air Force is simply preparing for tomorrow’s launch and refusing to spill the beans on the space plane's potential uses. But the military seems optimistic about this long-delayed program; Air Force officials have admitted that they have a second X-37B in the works, which they hope to take out for a test flight by 2011. Related Content: 80beats: Highway to the Green Zone? Navy to Test a Supersonic Biofuel Jet 80beats: Will the Pentagon Build the Jetsons’ Flying Car? 80beats: Meet the “Puffin,” NASA’s One-Man Electric Plane 80beats: DARPA Wants a Biofuel Jet, While Germany Works on a Hydrogen Plane