Acoustical Archaeologists Solve the Mystery of the Doge's Stereo System 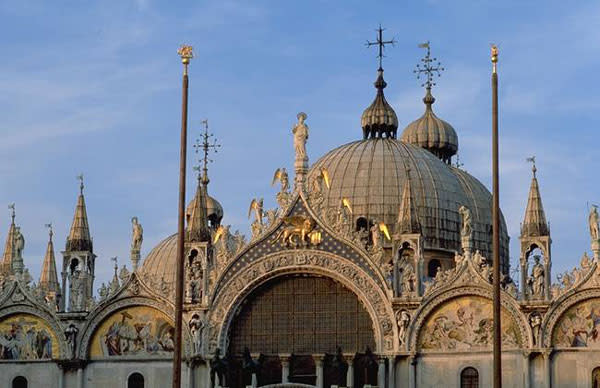 Saint Mark's basilica was where many Venetian polyphonic works had their debut performances, but the reverb presented a puzzle for historians.

Ah, the Renaissance---lots of deep thinkers, gorgeous art, busty maidens, fried dough on a stick (if Ren faires are to be believed), and the liveliest music this side of the Middle Ages. But when you compare the elaborate, up-tempo harmonies of late Renaissance polyphony

to the churches where they would have been performed, a serious discrepancy pops up. Giant Renaissance churches like Saint Mark's basilica

, both in Venice, have way too long of a reverberation time for those tunes to sound good. It takes a full 7 seconds for a note to fade after it's played or sung, and that means that songs, especially fast ones, blend into a giant muddy mess. A physicist and a music technologist, who presented their work at the American Acoustical Society on Monday

, wondered if the churches, when packed full of people and hung with heavy draperies during holy festivals, might have sounded much better than they do today. Working with architectural historians, they calculated the chairs, drapery, and audience members' ability to absorb sound. With a computer model of the churches, they were able to show that with full-on holy regalia and a crowded audience, the reverberation time was cut in half. They took their analysis even further to see if the small pergoli, or balconies, installed by an architect in Saint Mark's would have enhanced the experience of a person sitting in the Doge's throne when a choir was split between them (all the rage in Renaissance Venice

). Indeed, they found that with a split choir in a fully decorated church, the reverberation time at the Doge's throne was reduced to a mere 1.5 or 2 seconds, which is the gold standard for modern concert halls. To hear the Doge's stereo system for yourself, click here

and scroll to the bottom of the page. [via ScienceNOW