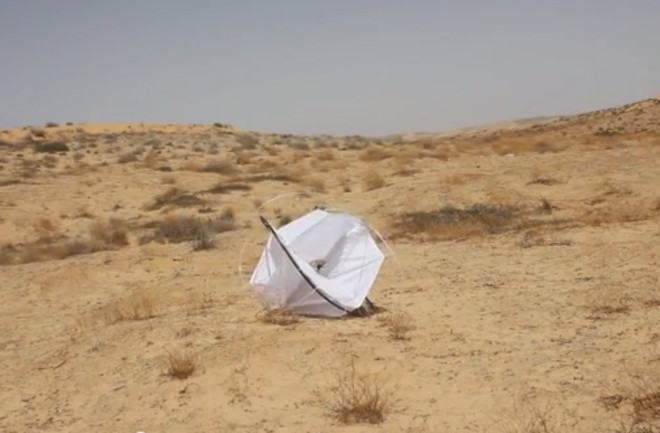 Shlomi Mir's wind-powered, data-collecting Tumbleweed could help map treacherous desert terrain. Credit: Shlomi Mir When the Sons of the Pioneers crooned about “drifting along with the tumbling tumbleweeds,” they never had this in mind: a robotic tumbleweed that could someday be used to gather climate data as it trundles across the barren landscape. That's the brainchild of industrial designer Shlomi Mir, who built a prototype of the so-called Tumbleweed Desert robot with an eye toward tackling the problem of desertification. Mir is intimately familiar with the expanding desert in Israel, where he lives. Desertification, in Israel and elsewhere, is placing pressure on populations by destroying arable soil and vegetation, leading to famine, flooding, and dust storms. Lonely But Free The device is simple and self-sustaining. It features a metal, rounded frame with sails attached to its interior that catch the wind and propel the robot over all sorts of terrain. A generator harvests this movement to power an onboard computer, sensors and a small motor. The motor allows the Tumbleweed Desert to open and close its sails when winds are favorable. Such a robot could cover lots of ground in the desert, where winds are high and there aren't many obstacles. The Tumbleweed Desert’s flexible steel structure allows it to bend and bounce around most desert impediments. It can also squash its wire structure into a flat position to stay put, 0r expand to full tumbleweed mode and ride the winds. By gathering weather data, the robot could help scientists understand desertification's extent and monitor its effects. Mir told Wired:

“There are applications where this system could go where people can’t go or can’t afford to go, or can’t go enough to collect the information that these researchers need,” he says.

Tumbleweed Team The Tumbleweed Desert hasn't began its data-collecting mission yet. Mir's first prototypes were working models intended to demonstrate basic viability. He's now working with researchers to continue modifying the robot’s design to make it smaller and more agile. Mir envisions releasing a fleet of such desert drifters to build 3-D maps of wind patterns across sandy dunes. With a little luck, then, the coming years will see these tumbling tumbleweeds make their way out of the lab and onto the range where they belong. http://www.youtube.com/watch?v=cmBCVVS_vns#t=29 http://vimeo.com/58967829