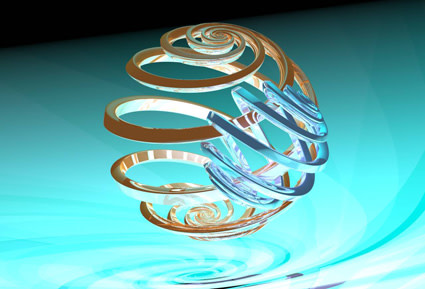 In life, most people try to avoid entanglement, be it with unsavory characters or alarmingly large balls of twine. In the quantum world, entanglement is a necessary step for the super-fast quantum computers of the future. According to a study published by Nature today, physicists have successfully entangled 10 billion quantum bits, otherwise known qubits. But the most significant part of the research is where the entanglement happened--in silicon--because, given that most of modern-day computing is forged in the smithy of silicon technology, this means that researchers may have an easier time incorporating quantum computers into our current gadgets. Quantum entanglement occurs when the quantum state of one particle is linked to the quantum state of another particle, so that you can't measure one particle without also influencing the other. With this particular study, led by John Morton at the University of Oxford, UK, the researchers aligned the spins of electrons and phosphorus nuclei--that is, the particles were entangled.

"The key to generating entanglement was to first align all the spins by using high magnetic fields and low temperatures," said Oxford's Stephanie Simmons, who also worked on the team.... "Once this has been achieved, the spins can be made to interact with each other using carefully timed microwave and radiofrequency pulses in order to create the entanglement, and then prove that it has been made." [Reuters]

If the current entanglement experiment were a cooking recipe, it would go something like this: First, embed a silicon crystal with 10 billion phosphorous atoms, cool it to close to absolute zero, and then apply a sequence of radio and microwave pulses. These pulses essentially toy with the spins of the phosphorus nuclei and their electrons until the spin of each nucleus matched the spin of one of its electrons. You end up with 10 billion entangled pairs that form a two-qubit system. It's a major breakthrough, but the researchers aren't stopping there:

"Creating 10 billion entangled pairs in silicon with high fidelity is an important step forward for us," said John Morton of Britain's Oxford University, who led the team.... We now need to deal with the challenge of coupling these pairs together to build a scalable quantum computer in silicon." [Reuters]

Spinning particles are all well and nice, but what do they have to do with computing? How does a quantum computer actually compute?

To turn this into a silicon quantum computer, the team must create a "huge 2D grid of entanglement", in which nuclei are entangled with other phosphorus nuclei, as well as electrons, says Morton. To achieve this, electrons will be shuttled through the structure, stitching entangled states together like a thread, he says. By measuring the electron spins in a certain order, computations could be performed. [New Scientist]

Such a quantum computer would run silicon circles around conventional ones. Unlike the device sitting on your desk, quantum computers aren't limited by the 0's and 1's of binary bits. In the weird world of quantum mechanics, particles can exist in more that one state at a time--they can be placed in a "superposition" of several possible states. That means that the qubits in a quantum computer could hold several different values simultaneously.

It has been shown theoretically that by running calculations in parallel, using many quantum states in superposition, a quantum computer could solve problems that would take a classical computer an infinite amount of time, for example, running Shor's algorithm, which factors large numbers into primes and could be used, for example, to crack the most powerful encryption algorithms on the Internet. [Nature News]

In short, a quantum computer would generate a computing power the likes of which the world has never seen, capable of running--as well as cracking--evermore complex algorithms. While impressed by the quantum leaps made by this research, scientists are already considering the next hurdles in the quantum computing story.

"It's nice, impressive work," says Jeremy O'Brien, a quantum-computing specialist at the University of Bristol, UK. But what is really needed, he says, is the ability to do the additional nanofabrication to put electrodes on the silicon chip to address each individual nucleus and electron pair, a technology that will be needed to get more than two spins entangled together in silicon. "That would be really impressive," he says. [Nature News]

Even though quantum computers have a ways to go before they wind up in your living room and in your every-day gadgets, thanks to successful silicon entanglement that day is getting closer. Related Content: 80beats: Can Physicists Make Quantum Entanglement Visible to the Naked Eye?