A Steady Spoon for a Shaky Hand

A battery-powered spoon stays steady to make mealtimes easier for people who have essential tremor. 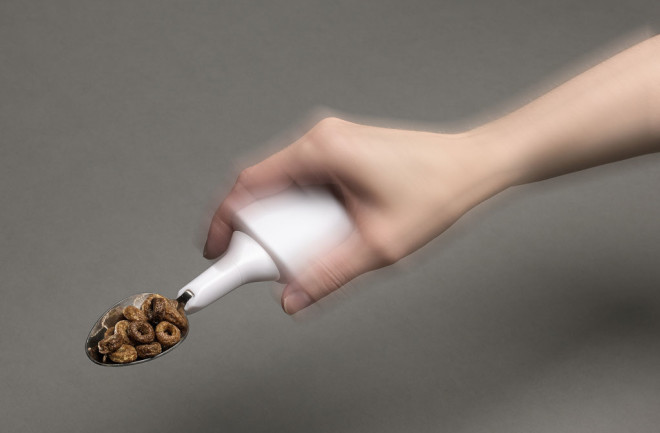 An estimated 10 million Americans have essential tremor, a rhythmic trembling in their hands that intensifies with action — and can turn mealtimes into spoon-vs.-mouth target practice. Enter Liftware, a battery-powered spoon that stays steady despite the user’s shaking.

Discover’s Elisa Neckar spoke to LiftLabs’ founder Anupam Pathak about the technology that’s leaving tremor sufferers “blown away by being able to eat rice and peas for the first time in years.” Bon appétit!

Taking Aim at Tremor As a doctoral student, Pathak researched countermeasures for physiological tremor, the normal shake present in everyone’s hands that can intensify with an adrenaline surge, low blood sugar or exhaustion. Physiological tremor can be a big problem in certain situations, such as combat, and Pathak’s work (funded by the U.S. Army Research Laboratories) focused on developing actuators in military equipment and weapons to offset users’ tremors. His research for the Army became the foundation for a different kind of fight: Aware that current methods for combatting essential tremor are limited — medicines are effective only in about 50 percent of cases — Pathak decided to take on movement disorder tremor.

We Have the Technology The basic motion-sensing and stabilizing technology in Liftware was already in use in smartphones and cameras. Pathak says he thought to himself, “Why can’t it be used to meet this need?”

Fork and key gripper options are in the works.

Rock Steady A motion sensor and a tiny computer in Liftware’s rechargeable base work together to analyze movement frequencies and distinguish unintentional tremor from intentional movements like bringing the spoon to your mouth. Based on that feedback, the utensil attachment compensates for the involuntary motion; if the tremor sends the base stabilizer to the left, the spoon head will adjust to the right. In clinical trials, Liftware effectively canceled tremors in an average of 70 percent of cases.

One Tool, Many Uses Only a spoon attachment is currently available, but options for a fork and deeper spoon should be available this spring. Pathak visualizes the tool eventually having many heads — a fork, a makeup applicator, a key gripper — all interchangeable using the same base unit. “Think of it as a Swiss army knife,” he says.

[This article originally appeared in print as "A Spoonful of Sweet Tech."]