A Sneak Peek at the First Cyborg Olympics 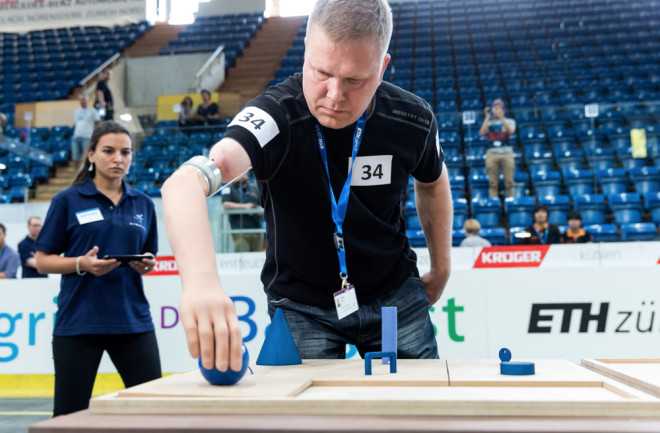 OPRA Osseointegratio, a Sweden, designed a surgically implanted prosthetic limb, which is in human trials. (Credit: ETH Zurich) While working as a professor in the sensory-motor systems lab at the Swiss Federal Institute of Technology in Zurich (ETH), Robert Riener noticed a need for assistive devices that would better meet the challenge of helping people with daily life. He knew there were solutions, but that it would require motivating developers to rise to the challenge. So, Riener created Cybathlon, the first cyborg Olympics where teams from all over the world will participate in races on Oct. 8 in Zurich that will test how well their devices perform routine tasks. Teams will compete in six different categories that will push their assistive devices to the limit on courses developed carefully over three years by physicians, developers and the people who use the technology. Eighty teams have signed up so far. Riener wants the event to emphasize how important it is for man and machine to work together—so participants will be called pilots rather than athletes, reflecting the role of the assistive technology. “The goal is to push the development in the direction of technology that is capable of performing day-to-day tasks. And that way, there will an improvement in the future life of the person using the device,” says Riener. Here’s a look at events that will be featured in the first cyborg Olympics.

A pilot plays a video game with a brain-computer interface during a Cybathlon rehearsal last year. (Credit: ETH Zurich) A woman sits at a computer while wearing a cap that has several electrodes attached to her head, wires cascading down her back waves. She’s playing a video game, but instead of using her hands, she’s using only her thoughts to drive a brain-computer interface system. During the Cybathlon, participants with complete or severely impaired motor function will use their thoughts to control an avatar in a racing video game. The winner will be the first to complete the race, maneuvering an avatar over obstacles and accelerating to the finish line. An algorithm will help determine which team's interface performed the best. Brain-computer interface devices are a key technologies that will allow people to control future prostheses with their minds.

Electrodes placed on the outside of the legs stimulate the muscles, giving racers the leg-power they need during a bike race. (Credit: ETH Zurich) Functional Electrical Stimulation

(FES) is a technique that sends electrical impulses to paralyzed individuals’ muscles to trigger movement. FES can help build muscle mass, increase blood circulation and and improve cardiovascular health. At Cybathlon, paralyzed bike racers will rely on FES to complete about five laps around a racetrack, equalling about 2,200 feet — first to the finish wins. Electrodes will deliver electrical stimulation to their muscles, giving them the leg-power to pedal their bikes. The pilots can actually control how much current they send to their muscles, so balancing speed and stamina will be key to winning the race.

Generally, electrodes are placed on a persons’s skin, but one team—the Center for Advanced Platform Technology from Cleveland—will surgically implant them closer to nerves where they can reach more fiber, reduce muscle fatigue and increase precision. Members of Team Cleveland developed implants — over the course of two decades — that allow a person with paraplegia to stand, perform leg lifts and take steps. For Cybathlon, they’ll adapt their system for bike riding.

The prosthetic arm from the M.A.S.S. Impact team. (Credit: ETH Zurich) The powered arm prosthesis race will show just how important performing basic, daily tasks are to Riener. Pilots with arm amputations will need to carry a tray of breakfast items, for example, and then prepare a meal by opening a jar of jam, slicing bread and putting butter on the bread — tasks that are easy to take for granted. Pinning clothing on a clothes line and putting together a puzzle with pieces that will each require a different type of grip are also challenges in this event. A prosthetic hand created by the M.A.S.S. Impact team from Simon Fraser University in Canada is a unique design that uses sensors and algorithms to recognize a grip pattern, and users can control the bionic hand in small, precise movements. The system also generates computer models

to improve function over time. Last year, organizers held a Cybathlon rehearsal last year, and Riener was especially impressed by OPRA Osseointegratio, a Swedish team that designed a surgically implanted hand controlled by a person voluntarily contracting his muscles. The technology is currently in human trials

, and the team's pilot is the first recipient.

Designing prostheses for lower limbs presents an entirely different set of challenges. Riener hopes to see prosthetic legs at the Cybathlon that can handle uneven terrain, which has been a challenge in the past. During the leg prosthesis race, pilots will compete on parallel tracks through obstacle courses laden with beams, stones, stairs and slopes. Right now, only the most advanced prostheses can handle these challenges — many are heavy and aren't powerful enough. Team Össur

will bring four different prosthetic legs to the competition. Riener says this team in particular is making incredible advancements in the field. He’s particularly impressed with their commercially available motorized knee prosthesis, as he says it’s more robust and reliable than many past devices. The team is also entering a powered leg prosthesis that is an upgrade to the powered knee and is still a prototype stage; it uses motorized joints to help achieve a natural gait.

(Credit: ETH Zurich) Exoskeletons are worn around the legs to help those with paraplegia walk or even climb stairs. While they’ve been used by physiotherapists in hospitals to improve the health of patients with paralyzed legs, Riener says many designs are still bulky and difficult to use on a daily basis. There are about six companies around the world with exoskeletons on the market, and more prototypes are being developed in research labs around the world. The Cybathlon exoskeleton event will include tasks that are particularly difficult for people using this technology to accomplish, such as stepping over stones and walking up a slope. “With these challenges, we’re hoping to see more lifelike exoskeletons with more movability,” says Riener.

(Credit: ETH Zurich) Those who use wheelchairs encounter challenges that other people might take for granted. Riener is excited to see how powered wheelchairs are evolving, getting smaller and more capable—in some cases even climbing stairs. “At Cybathlon, they will have to fit beneath a table, go up a steep ramp, open a door and then close it again, and go down a steep ramp,” says Riener. Scewo

, a team from ETH Zurich developed a wheelchair that balances on two wheels like a Segway and can use a chain to climb up stairs or steep ramps. While some of the teams are entering technology that is already on the market, Riener is especially excited to see new innovations that have been created from scratch, specifically for Cybathlon. “It’s exciting to reach a large audience to talk about issues related to people with disabilities,” he says.