A Secret Confederate Submarine Was So Deadly, Even the Crew Wasn't Safe 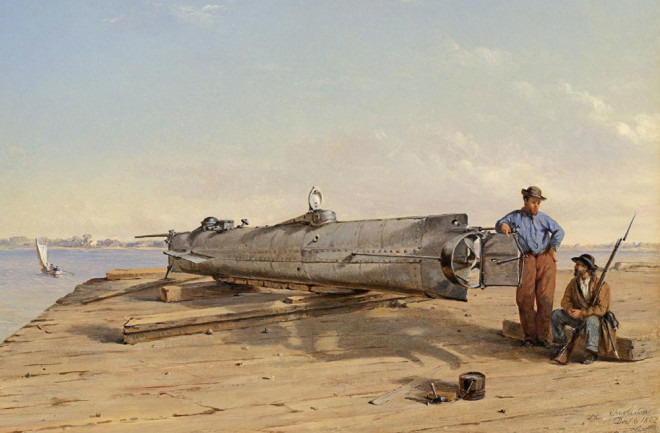 1864 painting of the H. L. Hunley by Conrad Wise Chapman. (Credit: Wikimedia Commons) On Feb. 17, 1864, naval warfare was changed forever. That night aboard the U.S.S. Housatonic, master John H. Crosby of the Union Navy saw what he described as a porpoise sliding through the water on a direct course for his vessel just a few hundred feet away. Three years prior, President Abraham Lincoln had ordered a blockade of all major Confederate ports, and the Housatonic, a sloop-of-war with 12 large cannons, was stationed in South Carolina’s Charleston Harbor to help the president apply a stranglehold to the South. Lincoln’s plan was working, and the Confederacy was desperate to smash the blockade and bring in badly needed supplies. But the agrarian South could never hope to defeat the well-equipped, powerful Union Navy using traditional battle tactics. They needed a secret weapon, and that’s exactly what Crosby saw coming toward him that night.

An illustration—circa 1900— of the H.L. Hunley's cramped interior and "engine." (Credit: Wikimedia Commons) By the time Crosby realized he wasn’t seeing a porpoise, it was too late. The H.L. Hunley, a first-of-its-kind, 40-foot-long, hand crank-powered submarine, and her crew were already close enough to deliver their payload. Sailors sounded the alarm and fired their guns at the oncoming shadow, but their bullets simply bounced off the submerged metallic hull. When Hunley met Housatonic, an explosion ripped a hole in the ship, and within 5 minutes the Housatonic sank, claiming the lives of 5 of the 155 crewmen. The sinking of the Housatonic marked the first time a submarine had successfully taken out an enemy vessel—anywhere. It was a deadly demonstration of the future of submerged naval warfare from what is considered the first modern submarine. As for the Hunley and her crew, well, they vanished mysteriously and became the stuff of myth and legend for nearly two centuries.

No one knew what happened to the Hunley after that first successful submarine strike. One Union sailor, on the night of the attack, thought he saw the faint glow of two blue lights in the distance, but there’s no way to know if that was indeed the Hunley. Apart from that anecdote, the submarine wouldn’t be seen again until May 3, 1995 when Clive Cussler and his team discovered it four miles off the coast of Sullivan’s Island. Its position and orientation suggested it was heading home after the mission. Over the next five years a team experts and government officials designed a plan to bring the Hunley to the surface, and in 2000 the vessel was successfully lifted. Researchers discovered 19^th century artifacts in the crew cabin, including a pockmarked coin that stopped a bullet and saved the submarine captain’s life in the Battle of Shiloh.

But something else was strange: The remains of all eight men were still at their stations on the hand-crank, as if time had stopped inside the capsule. There were no signs that the explosion damaged the ship. There wasn’t any indication of trauma seen on their skeletons. If the crew was suffocating or taking on water, they would have certainly tried to escape. But the escape hatches were still sealed; the bilge pumps hadn’t been used; the air hatches were closed. They appeared never to have moved, so how did these sailors die? Some speculated they drowned while others say they suffocated. What really happened was yet another another question that would persist for years—until now.

Researchers from Duke University took it upon themselves to solve one of the last remaining mysteries from the Hunley. Their experiment’s design was rather simple: They built a scale model of the Hunley, and subjected it to blasts from gunpowder bombs that were analogous to what was used in 1864. They measured pressure from the ensuing shockwaves both inside and outside their model submarine model. Figuring out how a shockwave travels through the water is easy, but modeling what happens when it encounters human flesh is much more difficult. The team spent three years conducting tests, building models and crunching numbers to accurately gauge what happened inside the Hunley that night. It turns out the Hunley crew was killed by the very weapon they were tasked with delivering. The powerful shockwave from the detonation rippled through the water and the submarine, as well as through crew members’ bodies. According to the researchers' calculations, there was an 85 percent chance that each Hunley crew member died after experiencing “blast lung”—the pressure wave basically tore the organs apart, killing them instantly. Indeed, air-fluid containing organs like the lungs and guts are most susceptible to damage as the pressure front from an explosion passes through fluids, air, tissues and bone. As explained in the Journal of Military and Veterans’ Health:

The Hunley’s crew probably knew they wouldn’t be heading home after completing their mission, but they may have lived had it not been for a few last-minute changes in tactics. Before the Hunley was deployed for a real military operation, she had sunk twice and claimed the lives of 13 others—including the submarine's designer—in two trial missions. Writing about the Hunley, Confederate general P.G.T. Beauregard stated, “It is more dangerous to those who use it than to the enemy.” The Hunley was originally designed to tow a floating wooden cask of gunpowder with a 200-foot tether. The crew would maneuver the submarine under an enemy ship, and a pressure trigger would ignite the bomb when it struck the boat. Unfortunately the craft was incredibly difficult, and dangerous, to navigate while submerged.

(Credit: Lance et al [2017])Worse for the South, Confederate deserters revealed to Union soldiers information about the secret submarine they were testing. So sailors in the blockade started anchoring in shallow water, hanging chains and ropes over the side of the ship to ensnare a new kind of enemy, and set out smaller boats to blow up torpedoes before they posed a danger. So Confederate generals reworked the plan. Rather than tow their torpedo, they affixed an iron—not wooden—keg filled with gunpowder to the end of a 16-foot spar at the front of the Hunley, and the crew simply rammed the it into the side of their target. The design would ensure their payload arrived, but at a great risk to the crew. Researchers say it was the combination of encapsulating the charge in and iron, rather than wood, case, the ship’s location underwater and the close proximity to detonation that ultimately killed the crew. The iron allowed more pressure to build up from the burning gunpowder yielding a more powerful blast; the shockwave traveled more efficiently through water; and the crew was close enough that the shockwave shredded their lungs. The Duke team published its results Wednesday in the journal PLOS One. Sure, the Hunley was the first submarine to sink an enemy ship, but it was a weapon that was equally dangerous to those that wielded it. And, after more than a century, scientists have pretty much solved the biggest mysteries about the first submarine and its crew.