A New Take on the Biodegradable Car 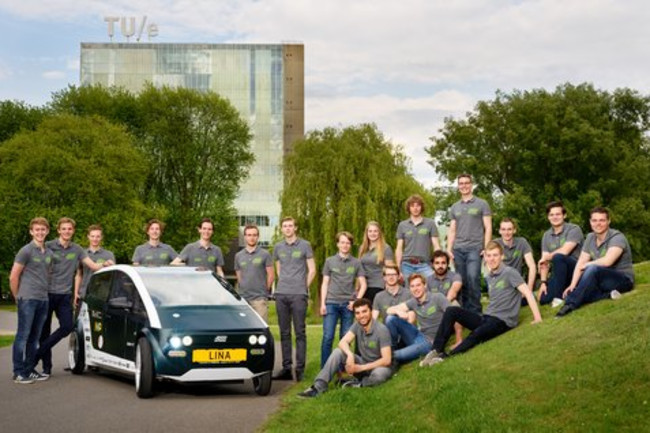 The Lina biodegradable car. (Credit: Eindhoven University) A concept car in the Netherlands is constructed almost entirely of materials the grow in the soil. Called "Lina," the biodegradable car is the work of students at Eindhoven University of Technology and is composed mainly of sugar beet resin and flax. It weighs in at under 700 pounds and can reach a top speed of around 50 miles per hour. The four-seater runs on batteries and can go about 60 miles on a single charge, according to the university. The interior is admittedly a bit spare, but the car has a few luxury upgrades, like near-field communication technology to open the doors and a heads-up display that projects speed and other information onto the windshield. Working lights and turn signals qualify the car for the road, but it has yet to pass safety tests. One reason for this is the tendency of the biodegradable panels to break, rather than buckle like metal does in a crash. The beet and flax take just 20 percent of the energy that traditional materials like steel and aluminum require during automotive production, the team says, and its low weight further enhances energy savings. And, when you're done with it, the materials will mostly all return to the Earth naturally. A few components, such as the batteries and tires, were not biodegradable, in addition to the few metal components of the car. A similar biodegradable car, the Phoenix Roadster, was built as a prototype in 2011 out of bamboo and rattan, with a projected life of five years. If car owners wanted to get more use out of their car, they could simply swap the old skin for a new one. While fully biodegradable cars may not be in our near future, the project does prove that certain parts — hoods, side panels, interiors — can be constructed of light, biodegradable materials. The appeal is even stronger for parts that will wear out anyway, like tires. Michelin has already announced a prototype biodegradable tire that would be both airless and 3-D printable, and the same could go for plastic components on the interior and beneath the hood.