A Mind-Reading Helmet to Catch Criminals and Enemies! Or Not 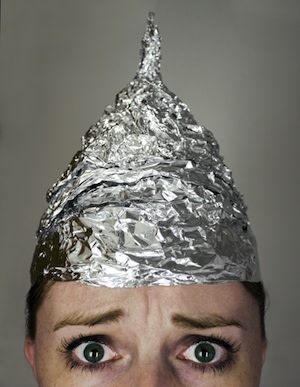 Someone's prepared for an interrogation

Can someone peer into your head to see what you’re thinking? Veritas Scientific

wants to. But don't start making a tin foil hat quite yet---the electroencephalogram (EEG) helmet that Veritas is developing won't actually read your mind. It only detects the brain signals that indicate recognition. The instrument , as large as a motorcycle helmet, blocks out distractions as images flash on the inside of the visor. Meanwhile, metal brushes map the scalp’s electrical activity to detect the subject’s reaction to each one of those images. In particular, a characteristic response called P300 occurs when the brain recognizes an object. This could come in handy for lie detection: If police are interrogating a suspect who claims to know nothing, but he recognizes images of an accomplice, victim, or even crime scene, the helmet would catch his lie. Veritas even suggests that the right slideshow images and questions could help identify an enemy combatant pretending to be an innocent. But there’s one major flaw with the helmet: the P300

signal. Although it does indicate recognition, P300 also occurs in response to many other stimuli including depression, arousal, surprise, stress, loud noises, and being the focus of attention. And interrogations, where this helmet might be used, have plenty of surprises, stress, and attention. In a situation where false positives could lead to imprisonment and harsh punishments, maybe we shouldn’t be putting our faith in mind-reading---at least, not yet. [via IEEE Spectrum