A Hide-and-Seek-Playing Robot Learns How to Lie 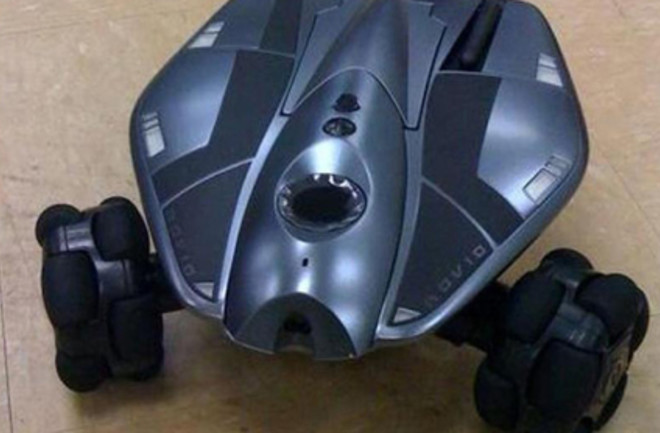 It fakes to the left; it goes to the right. But the deceiver isn't a running back, and this isn't football. Meet the newest lying robot. Georgia Tech scientists Alan Wagner and Ronald Arkincreated two bots on wheels that play hide and seek with each other. The hider, however, had something the seeker lacked: an algorithm in its programming that allowed it, under certain circumstances, to fib. The prevaricating machine was pretty good at it, too, fooling the naive seeker three-quarters of the time in a simple test. Here's the setup: There are three spaces in which the hider could hide—left, middle, and right. There are also three markers standing in a row, the idea being that the hiding bot would run over the left marker if it decided to hide at left, or the right marker if it decided to hide at right. The seeker bot knows this, and so it would look for the clue of a fallen marker to predict where its target is hiding.

However, unbeknownst to the poor red seeker, the black robot had a trick up its sleeve. Once it had passed the coloured markers, it shifted direction and hid in an entirely different location, leaving behind it a false trail that managed to fool the red robot in 75 percent of the 20 trials that the researchers ran. The five failed trails resulted from the black robots’ difficulty in knocking over the correct markers. [Wired.com]

This is the newest development in the robot deception revolution, which began a few years ago

In 2007, Swiss researchers discovered that robots programmed to learn from experience spontaneously evolved the habit of lying to one another under some conditions. But the idea of deliberately implanting deceit is new. [ScienceNOW]

Of course, if you're worried about a future robot uprising against their creators, the fact that they're learning how to lie probably doesn't do much to assuage your fears. Wagner responds that deception isn't necessarily bad.

In practical terms, the researchers described situations where deception may be required, such as in search and rescue, where the robot may need to calm a panicking victim. Also, they said, robots used in battlefield situations would benefit from being able to mislead an enemy. [CBS News]

Arkin is one of the chief minds mulling over the moral quandaries of granting machines more autonomy to lie, or even kill. The feature article "How Does a Terminator Know When Not To Terminate?

" from DISCOVER's May issue hits on a project he calls the "ethical governor." In future wars, autonomous military robots would need to employ the kind of discretion that human soldiers do to avoid targeting civilians and to decide how much firepower to unleash. His ethical governor would be a set of programmed rules to guide robot decision making—for instance, forbidding it to desecrate a cemetery or religious building, so the bot would not fire even if the enemy gathered there. What about deceit? Arkin freely acknowledges that there are "beneficial and deleterious aspects" to lying robots. He welcomes debate over whether or not deceit should or could be restricted, but that's unlikely to stop fears of a forthcoming Skynet

. A paper on the work will appear in the International Journal of Social Robotics

(PHOTOS) DISCOVER: The Rise of the Machines Is Not Going As We Expected

DISCOVER: Robots Evolve And Learn How To Lie