A Gun for All Wars? 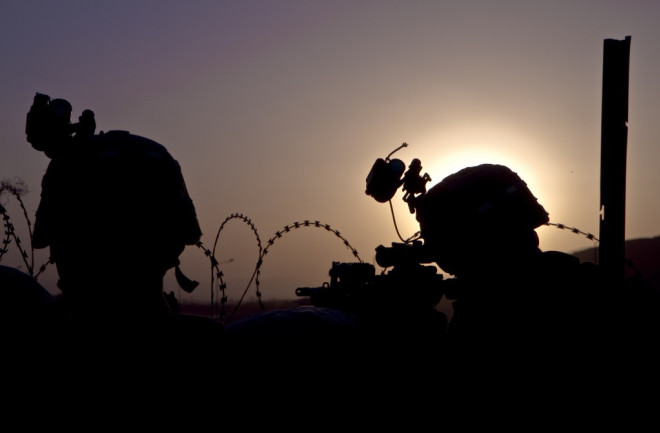 U.S. Army Soldiers with the 4th Brigade Combat Team, 101st Airborne Division (Air Assault), pulls security during a battle drill on Forward Operating Base Lightning, Afghanistan, Sept. 3, 2013. Credit: Sgt. Justin A. Moeller, 4th Brigade Combat team Public Affairs When the British East India Company first invaded Afghanistan in 1839, its troops came under constant fire in the mountain passes from Afghan tribesmen armed with homemade "jezail" matchlock guns that outranged the muskets carried by the British soldiers. Today's U.S. Army riflemen, armed with M4 carbines, have similar trouble returning fire when Afghan Taliban fighters attack them from the high ground using longer-range machine guns and mortars. How did troops belonging to the world's most powerful modern military end up seeming so outgunned? The first answer is that the M4 carbine — a shorter-range variation of the M16 assault rifle — was never designed for long-range firefights such as those taking place in the valleys of Afghanistan. But the problem faced by U.S. Army soldiers in Afghanistan goes beyond the limitations of a single weapon such as the M4. The U.S. military is currently expected to deploy practically anywhere around the globe; it's doubtful that any gun exists that can perform well in all scenarios. U.S. Army commanders made the choice to equip most soldiers with the compact M4 that works within the tight quarters of vehicles and urban environments, according to a 2009 U.S. Army Command and General Staff College report by Maj. Thomas Ehrhart. By comparison, the U.S. Marine Corps has continued to favor the longer-barreled M16 rifle as its main infantry gun; a weapon that is more unwieldy to use in tight quarters but can effectively kill enemies at longer range.

A Soldier with 1st Battalion, 32nd Infantry Regiment, 10th Mountain Division, fires an M4 rifle during a gun battle with insurgent forces in Barge Matal, Afghanistan, during Operation Mountain Fire, July 12. Credit: U.S. Army Sgt. Matthew C. Moeller, 5th Mobile Public Affairs Detachment "The current nature of conflict around the globe requires that the infantryman be equipped and trained to fight in any environment to include the jungles of South America, the mountains of Afghanistan or the streets of Iraq," Ehrhart writes. "For the infantryman to accomplish these tasks, he must either be organized with different capabilities or have equipment that is adaptable to the environment." The M4 works better than the M16 for close-quarters fighting in the cities of Iraq, but has been less effective in countering the Taliban's strategy of attacking U.S. military patrols or convoys from the high ground in Afghanistan. Ehrhart pointed out that the long-range fights in Afghanistan limit a U.S. Army company's firepower to just machine gunners, mortars and designated marksmen armed with long-range rifles. Those weapons represent just 19 percent of a company's firepower. As a result, U.S. infantry have often done their best to "fix the enemy" while relying upon U.S. air support, mortars or artillery to finish the job. "The enemy tactics are to engage U.S forces from high ground with medium and heavy weapons, often including mortars, knowing that we are restricted by our equipment limitations and the inability of our overburdened soldiers to maneuver at elevations exceeding 6,000 feet," Ehrhart writes. "Current equipment, training and doctrine are optimized for engagements under 300 meters and on level terrain."

Evolution of the Army's Gun

Historically, the U.S. military has never really found a single weapon that worked well for its Army and Marine riflemen in all battlefield scenarios and conditions. During World War II, U.S. soldiers liked using their long-range M1 Garand rifles in the relatively open spaces of Western Europe, according to Robert Dale Hinrichs, author of a thesis titled "Rifle development, standardization, and procurement in the United States military 1950-1967". But U.S. soldiers fighting in Italy favored the mobility and higher rate of fire from sub-machine guns because fighting in the Italian mountains tended to be at short range. Similarly, U.S. Marines fighting in the jungles of the South Pacific also found good use for the short-range Thompson sub-machine guns. U.S. Army and Marine riflemen later found themselves frequently outgunned during the Korean War in the 1950s, unless they used heavier support weapons such as the Browning Automatic Rifle (BAR). Their accurate M1 rifles and carbines could not put out nearly as much firepower as the burp gun — a sub-machine gun — carried by many Chinese soldiers in the People's Liberation Army. Retired Lt. Gen. Hal Moore, a U.S. Army captain during the Korean War, described the burp gun's sound in the book The Coldest Winter, "like a can of marbles when you shook them, but on full automatic it sprayed a lot of bullets and most of the killing in Korea was done at very close range and it was done quickly — a matter of who responded faster. In situations like that it outclassed and outgunned what we had. A close-in patrol fight was over very quickly and usually we lost because of it."

U.S. Army soldiers of companies B and C, 1st Bn, 8th Inf, 1st Bde, 4th Inf Div, assemble on top of Hill 742, located five miles northeast of Dak To, prior to moving out. Taken 14-17 November 1967. Credit: U.S. Army Center of Military History The M1 rifle eventually gave way to the M14 rifle, which had a short-lived service as the basic infantry weapon before the U.S. military switched over to the M16 assault rifle. The lightweight, automatic weapon had a rough debut during the Vietnam War of the 1960s and 1970s because of changes the U.S. military made in the weapon without consulting Eugene Stoner, the original designer. The result was a frequent malfunction involving stuck cartridges that led to the deaths of many U.S. troops who frantically tried to clear their weapons during battle. Still, the automatic firepower of the M16 suited the close-quarters jungle combat of the Vietnam War. The M16 and its M4 descendant have evolved since that time through a number of design changes to become more effective weapons in the hands of modern U.S. troops, even if there is still some debate about the weapons' reliability in Afghanistan. But the evolution of the U.S. Army's main infantry weapon and infantry doctrine toward shorter-range, automatic weapons has also contributed to the mismatch that it faces in Afghanistan today. Almost 100 years ago, U.S. "doughboy" soldiers entered World War I carrying rifles that could kill at a range of almost three quarters of a mile. Modern U.S. Army riflemen have trouble using their M4 carbines to exchange lethal fire with Taliban fighters beyond distances of one fifth of a mile. "The fact is that in its search for the suppressive fire capability of automatic fire, the U.S. infantry weapon has devolved from the World War I rifle capable of conducting lethal fire out to 1,200 yards, to the current weapon that can hit a target out to 300 meters, but probably will not kill it," Ehrhart writes.

What Is Good Enough?

That's not to say the U.S. Army hasn't tried to solve its range problem in Afghanistan. It has doubled the number of designated marksmen in each nine-person squad from one to two soldiers, with each marksman carrying a long-range weapon such as the M14 Enhanced Battle Rifle. Such added long-range power within each squad has proven handy when more specialized sniper teams are in short supply. The Army has also beefed up the long-range firepower of its infantry units in Afghanistan with the M3 Carl Gustaf, a reusable anti-tank weapon with an explosive punch that was formerly only used by United States Special Operations Command forces. But that still leaves the question of what the Army will decide to do with its main infantry weapon in the future. Despite political pressure from Congress, recent Army attempts to find a "leap ahead" replacement for the M4 ended with no clear winners, according to Breaking Defense.

U.S. Army Spc. Robert Zarlenga, a paratrooper with the 82nd Airborne Division's 1st Brigade Combat Team, fires his M4 carbine at insurgent forces June 15, 2012, near Joint Security Station Hasan, southern Ghazni Province, Afghanistan. Credit: U.S. Army photo by Sgt. Michael J. MacLeod, Task Force 1/82 PAO Ehrhart recommended several possibilities for the Army such as upgrading the M4 and M16 weapons to fire larger 6.8 mm caliber bullets, improving marksmanship training, and reorganizing infantry squads to have longer-range firepower options. He also suggested the "arms room" concept of giving each squad the option to choose from several weapons and sights to pick the one best suited for any given mission — an idea that could work with the many existing varieties of M4 and M16 weapons. Others are less forgiving toward the current generation of M4 and M16 weapons. Retired Maj. Gen. Robert Scales has criticized the M4 and M16 as being nothing less than "bad rifles" in the January issue of

Scales called for a "next-generation, all-purpose infantry rifle" with larger caliber bullets, smart rifle sights that use miniature computers to automatically calculate the best shots on target, and a modular design that allows the user to convert his or her gun into anything from a carbine to a light machine gun. Kyle Mizokami, a defense journalist writing for the Medium publication War Is Boring, respectfully suggests that Scales' recommendation for replacing the M4 is unnecessary. Like Ehrhart, he points out that the M4 carbine (and M16) can be upgraded to remain competitive as the main infantry weapon for the U.S. Army in future wars, even if it's clearly not the ideal weapon for Afghanistan. "Much like the M-4 Sherman tank of World War II, the M-4 carbine is a compromise driven by the Army’s global responsibilities," Mizokami writes. The M4 Sherman tank analogy goes beyond having a similar name designation. The mass-produced, reliable Sherman was frequently outgunned when it fought against more heavily-armored, deadlier German panzers, especially the elite Panther and Tiger tanks. But Steven Zaloga, a military historian and senior analyst at the Teal Group Corporation, described the Sherman as being a "good enough" tank for the U.S. military during World War II — especially because the U.S. chose to spend far more money on other military technologies such as new aircraft. Today's U.S. military is also seeking to strike a balance among the many weapon technologies that it develops for future wars. In that context, the U.S. Army has apparently decided that the M4 carbine is good enough.