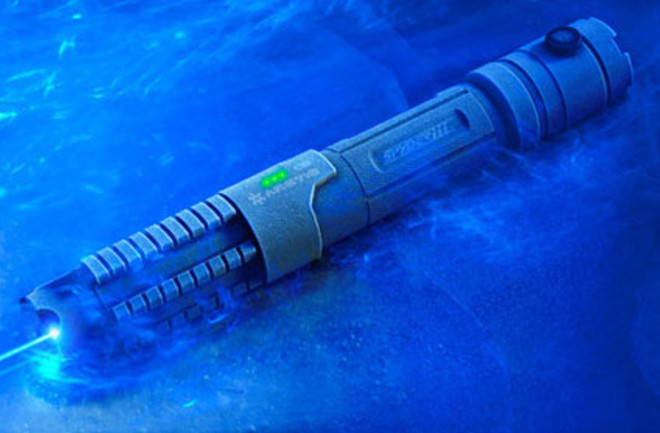 Lightsabers have come a long way since the telescoping plastic toys of yesteryear. We're not talking about realistic sound effects or iPhone apps. We're talking flesh-burning, eye-blinding lasers. Although this gadget is dangerous enough to require customers to fill out a "Class 4 Laser Hazard Acknowledgment Form," the Spyder III Pro Arctic Laser looks like it might be found in a Toys-R-Us, next to rows of action figures and Yoda dolls. At least George Lucas thinks so; Lucasfilm is now threatening to sue the manufacturer. As reported in DailyTech, where we first saw this story, Lucasfilm feels a great disturbance with the similarities.

"It is apparent from the design of the Pro Arctic Laser that it was intended to resemble the hilts of our lightsaber swords, which are protected by copyright..."

These are no toys, counters the seriously-named manufacturer, WickedLasers. They have added several security measures, including "training lenses," but don't appear to be willing to change their Jedi-like hilts anytime soon. Cue Duel of the Fates.

Related content: Discoblog: Is the Force With Your iPhone? Find Out With the Lightsaber Duel App Discoblog: National Pork Board to Unicorn Meat Purveyor: Lay Off Our Slogan Discoblog: Scientists to Hollywood: Please Break Only 1 Law of Physics Per Movie DISCOVER: The Science and the Fiction, in which Phil Plait critiques sci-fi science Image: flickr /