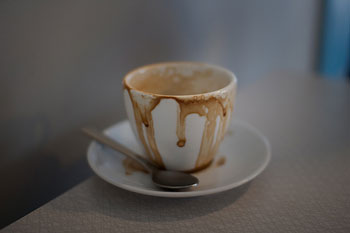 Sorry to tell you this, US Navy, but in our opinion, you've been had. This new app you've funded, dubbed Caffeine Zone, is not the best way to schedule your caffeine intake so as to maximize awesome and minimize double vision and crazy manic behavior. Not by a long shot. True, Caffeine Zone, developed by researchers at Penn State, does draw on studies that suggest that between 200 and 400 milligrams of caffeine in the blood is the sweet spot, the level at which that glorious productive high kicks in. Likewise, studies also say that having about 100 milligrams in the blood around bedtime puts you in the danger zone of insomnia. But when users type in when they plan to drink their caffeine, how much of it they'll drink, and how fast they'll drink it, the readout they get of their projected caffeine levels throughout the day sounds like a pretty basic chart that reflects how long caffeine hangs around in the average Joe, at least in this press release

. It doesn't take into account individuals' metabolism, whether they've eaten recently, and all the other things that even the most dilletante-ish coffee addict can tell you affect the high. To make an actual personalizable app, we suggest looking into the many ways researchers and doctors are adapting smartphones to make diagnoses

can show you in far more detail

the effects of caffeine on your sleep, albeit by proxies like how much you toss and turn. And if these scientists

have their way, you could eventually submit samples to a caffeine-tracking app by smearing spit or blood samples directly on your touchscreen. While there isn't an obvious way to get a sense of blood caffeine levels from a smartphone at the moment (we think), it seems like recording how fidgety you get every hour after a dose and a way to enter your diet-tracking option would be useful calibration: after putting a bunch of data, hey presto! you've got something personalized for you. The data-gathering options are out there

, and it shouldn't be difficult to come with a way to make this more customized.