A Burning "Infofuse" Can Transmit Messages Via Colored Flames 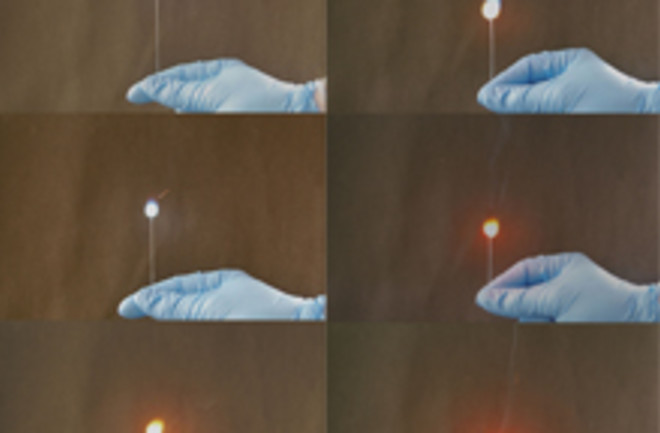 "LOOK MOM NO ELECTRICITY." That was the first message conveyed by a rudimentary new communication system that researchers are calling the "infofuse." In a new study, researchers printed patterns of three different flammable metallic salts on a nitrocellulose fuse and then set the fuse on fire. As it burned, it emitted pulses of different colored light that can be interpreted with a Morse code system. In the study, published in the Proceedings of the National Academy of Sciences, researchers explain that they

developed a code for the alphabet, numbers and four special characters (a full-stop, comma, exclamation mark and the "@" sign) based on the presence or absence of one of the three metals in each dot. Extra coding information comes from the length of the dot, which determines the duration with which it burns, and the space between dots, where no colour is produced [New Scientist].

They placed dots of the three metals--lithium, rubidium, and caesium--on the paper using an ordinary ink-jet printer. When the infofuse was set alight, its precise patterns were "read" by an optical detector.

The researchers developed the infofuses in response to a call from the Defense Advanced Research Projects Agency (DARPA) for technologies to allow soldiers stranded without a power source to communicate. DARPA wanted "something that doesn't require any electronics or heavy equipment to lug around" [Technology Review],

"We think it could be of use as a type of signal flare.... When people are stranded, regular flares only give you a couple of options: 'I'm in trouble'; 'I'm OK'," says Thomas. "Infofuses could be used to transmit a more informative message such as, 'How many people are there?' and 'We are hurt'" [New Scientist].