#80: Invented: Self-Healing Rubber Made From Vegetable Oil and Pee Ingredient 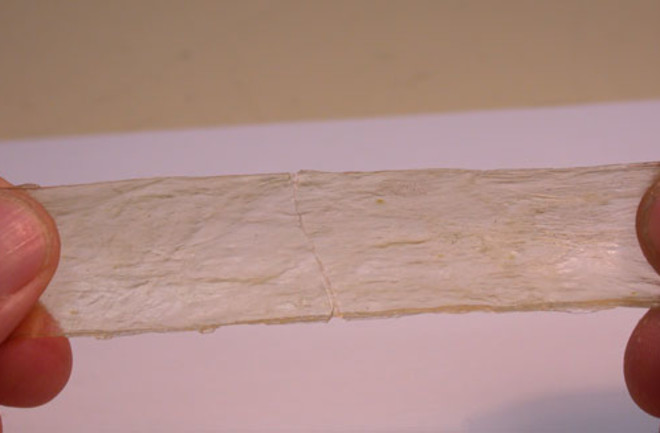 Rubber bands may stretch to several times their initial size and snap back into their original shape, but if they are cut or broken, they cannot reseal—unless they are made of a new type of rubber developed by French researchers.

Instead of using the chemically linked long-chain molecules found in traditional rubbers, Ludwik Leibler and his colleagues at the Centre National de la Recherche Scientifique in Paris thought they could make stretchy materials from much smaller building blocks that associate with each other in a network. They started with fatty acids, the chemicals found in vegetable oils, and joined them to other molecules. In the resulting mixture, each molecule has two or three sticking points that allow it to connect reversibly to other molecules in the system.

These intermolecular connections, consisting of hydrogen bonds, give the smaller molecules the stretchiness of much longer molecular chains. When this new material is cut, the bonds are broken, but when the cut ends are put back together, the connections re-form and can even regain their original strength.

The researchers are already working with a chemical company, Arkema, to scale up production of the material. Resealing rubber could have all kinds of applications, Leibler says, including the manufacture of rubber toys.