Peter Vesterbacka on the secret to making the most popular, ridiculously addictive video game in history. 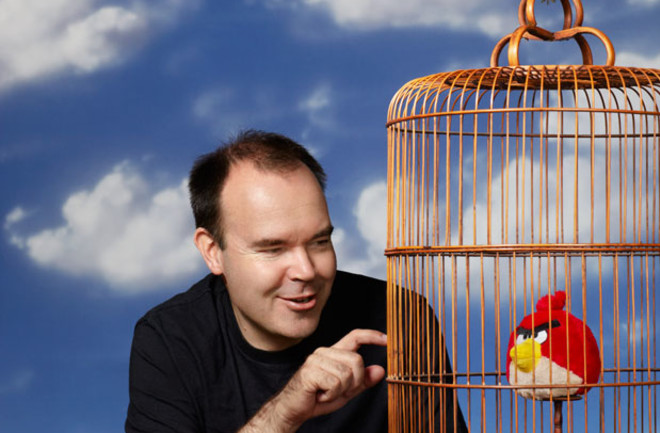 In the early 2000s, arguably the smartest things about smartphones were the contact books and calendars. Peter Vesterbacka, then a business development executive at Hewlett-Packard in Finland, had a different vision. He saw the smartphone not just as a perfunctory work accessory but also as a powerful gaming platform. In 2003, wanting to expand HP’s mobile gaming offerings beyond standards like solitaire, he began a contest for the best multiplayer smartphone game; three Finnish college students won with a whack-a-mole-like game. The students went on to found a mobile gaming company, Rovio, near Helsinki.

Today Vesterbacka is Rovio’s chief marketing officer and the driving force behind the company’s blockbuster mobile game Angry Birds, in which players use a touch screen to slingshot vengeful birds at towers to destroy the egg-stealing pigs who live inside. The game’s brilliant graphics, coupled with its childlike simplicity, have helped make it the most popular mobile game in history. By the end of last year, it had been downloaded more than 500 million times.

Vesterbacka spoke with DISCOVER about how those birds got so angry and about the future of mobile gaming.

How did Angry Birds start?

We made 51 earlier games before deciding to revamp our development strategy in 2009. Every week we would have internal meetings to pitch new ideas. At one of them, Jaakko Iisalo, one of our designers, pitched a game that was very different from what Angry Birds would be, but it featured the birds. Basically the whole company fell in love with the birds, so we started building a new game around them.

Originally we were just trying to flip the birds around, and it wasn’t immediately obvious how to play the game. Then we decided to develop an enemy for the birds, and that’s when we came up with the pigs. The slingshot that you launch the birds with was actually introduced fairly late in the process.

When did you first realize the game would take off? The first time that we knew we were onto something was when Niklas Hed, one of our founders, showed the game to his mother at Christmas dinner in 2009. Typically when we made a game, our friends and family would have a look and say, “Yes, that’s very nice,” and then hand the phone back. But with Angry Birds, Niklas didn’t get his phone back. His mom kept playing all Christmas, and I think that was a very good indication that there was something to this game.

Are you surprised by how successful Angry Birds has become?  We had high expectations for the game, but nobody imagined this kind of scale. Last year we started talking about our ambition to get to 100 million downloads, which no game had ever done. Pretty much everybody thought we were crazy, both outside of Rovio and also within the company. Now we’re over 500 million.

What do you think makes the game so insanely popular? For one thing, it’s character-based: People really love the birds and love to hate the pigs. There’s an emotional engagement, and I think in all entertainment you really have to create emotion.

Then there’s the slingshot. Pulling it back with your fingers adds a vital experience. Angry Birds is actually one of the first games that was optimized for touch-screen devices, and mobile touch-screen devices in particular, rather than being derived from games that are really holdovers from PCs or the Web.

The other big factor is approachability. When you pick up the game you immediately know how to play the game. Everyone from 2-year-olds to grandparents intuitively get it. In fact, we have lots of grandparents writing in, saying they can play the game together with their grandkids and bond over it.

What about the relationship between Angry Birds and Apple—how has Apple changed gaming?

Only with the iPhone and the App Store could Angry Birds be so successful. A lot of the games we made before the iPhone were good games, but the market was not there. It was really difficult to get distribution if you were a small company in the times before the App Store. The iPhone in particular has been really good for smaller players like us. In technology, it’s typically the little furry animals—the start-ups—instead of the old, established companies—the dinosaurs—that innovate.

The touch screen had a huge impact on gaming. What emerging technologies might have the same sort of transformational effect? One major thing is the tablet. You get a slightly bigger experience that you can carry with you most places. And we are also seeing more sensors. But the really big tech theme now is the integration of the physical and virtual worlds. Angry Birds Magic, for example, takes advantage of something called near field communications (NFC), a technology that allows two devices to swap encrypted data by bumping together. When you walk into a store, you can tap your phone on certain NFC-enabled books or toys and unlock special features in the game, kind of by magic. Games are always pushing the envelope in that way.

What comes next for you and Rovio? Right now we’re working on more Angry Bird games and animations, similar to how Nintendo has been working on Mario for the last 26 years. Mario drives a car; it becomes Mario Kart. Mario flies to space, and it becomes Super Mario Galaxy. We’re doing the same sort of thing. We want to be the first entertainment brand—games, movies, everything—to have a billion fans.