There are many tools and objects that we use every day and never stop to think about where they came from. 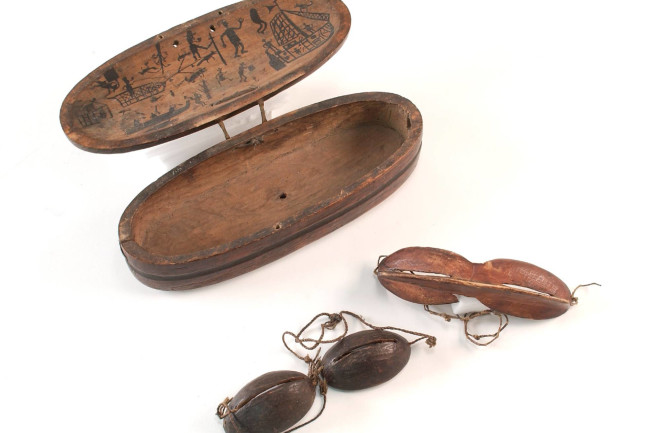 We owe some of our most useful tools to the creativity of Indigenous people who lived hundreds, thousands, or even millions of years ago.

These civilizations needed all kinds of gear to survive and protect them from their environments, whether they lived in the Arctic or the Amazon. Imagine, for instance, trying to hunt in an endless sea of white snow on a sunny day without sunglasses — you’d never be able to see your prey because you’d have to spend the whole time squinting to keep the blinding sunlight out of your eyes. Or try getting a good night’s sleep on the forest floor, knowing that reptiles and rodents are crawling around your toes. It’d be easier with a hammock to lift you off the ground.

Indigenous people invented countless tools and strategies for survival that were so effective, we still use them today. Discover magazine asked researchers for some of their favorite examples.

Kayaks were developed by Indigenous people living in Arctic regions thousands of years ago. Before the bright-colored plastic versions of today, these boats were originally made out of wood covered in animal pelts, and used to navigate the icy waters while hunting. The kayak, explains Gaetana DeGennaro, who manages the imagiNATIONS Activity Center at the National Museum of the American Indian, “is pretty special. ... The design has remained basically the same and people are still using it today, just using different materials.” Today, kayakers can paddle through all sorts of water, from ocean waves to calm lakes.

An Inuit seal hunter in a kayak armed with a harpoon. (Credit: Wili Hybrid/CC by 2.0/Wikimedia Commons)

Another challenge for those who lived in Arctic regions was snow blindness. “The sun would come down and be reflected off the ice and snow. And obviously that brightness could cause snow blindness,” says DeGennaro. To combat the glare, Indigenous people developed the precursor to today’s sunglasses. They weren’t tinted lenses, but instead were goggles made out of animal bones, driftwood or ivory. “People developed these tight-fitting goggles that would fit snugly onto a person’s face with slits in there that would cut down on the amount of ultraviolet rays [reaching] the eyes,” she explains.

Snow blindness is caused by sunlight reflecting off white snow and ice, causing temporary loss of vision. Inuit people in North America wore goggles to shield their eyes from such glare. These goggles are made from pine and rawhide. Slits in the rawhide allowed the wearer to see. (Credit: Wellcome Images/CC by 4.0/Wikimedia Commons)

Native Americans and ancient priests in Mexico often smoked pipes during spiritual rituals. Such ceremonial pipes came in all shapes and colors and were made out of a variety of materials like wood and clay. “Native peoples created remarkable types of pipes for a long time,” says Matthew Sanger, curator of North American Archaeology at the National Museum of the American Indian. “That influenced Europeans and people around the world. And, of course, smoking is now a global phenomenon.”

A pipestem from the upper Missouri River area without the pipe bowl. (Credit: Public Domain/Wikimedia Commons)

There is evidence that stone tools were used 3.4 million years ago in Africa. “Our modern household tools are only metal replacements of these indispensable [stone] tools,” says Curtis Runnels, an archaeologist at Boston University. These tools had “sharp, V-shaped cutting edges created by striking a thin flake or splint from a block of stone.” These sharper-edged stones were used much like we use knives today — to cut meat, skin, wood, plants and more.

While today they’re mostly synonymous with relaxation and tropical getaways, hammocks were originally used in Central America to keep sleepers safe from poisonous creatures on the ground and to increase airflow in hot, humid climates. After Europeans saw people in the Caribbean using the woven, raised beds, Columbus and his companions brought the idea back to Spain. “After that, Europeans started to use those hammocks in their boats for sleep,” says DeGennaro.

The tradition far predates Columbus' encounter: Some anthropologists suggest that Indigenous Mayans may have been using hammocks around a thousand years ago. One of the earliest known written records of hammocks comes from the Spanish historian Bartolome de Las Casas, who wrote about the floating beds in Historia de las Indias in the early 1500s.

A modern hammock made from bamboo. (Credit: Follow Focus/Shutterstock)

Rubber trees are native to the Amazon rainforests. While vulcanized rubber — rubber that’s been processed with heat and chemicals to increase its strength and stability — was invented in the 1800s, the Olmecs, Aztecs and Mayans were known to use the sap from these trees to create a natural rubber. “They still play a ball game, with a rubber ball, that’s thousands of years old,” says DeGennaro.

In order to give rubber characteristics like bounciness and durability, the people would mix the sap with juice from morning glory plants. According to researchers at MIT, varying the quantities of juice and sap could produce rubber products specifically for different uses. “From writings,” says DeGennaro. “We learned that people in Middle America had rubber soles on their sandals,” for instance.

The Iroquois, Native Americans who lived in the 1700s in what is now upstate New York, developed a democracy made up of six nations known as the Iroquois Confederacy. Each tribe took care of their own governance, but for issues that were of interest to all, decisions were made together. “There's really good evidence about some of the founding fathers of the United States drawing the ways in which Iroquoian groups were practicing democracy in the seventeen hundreds," says Sanger.