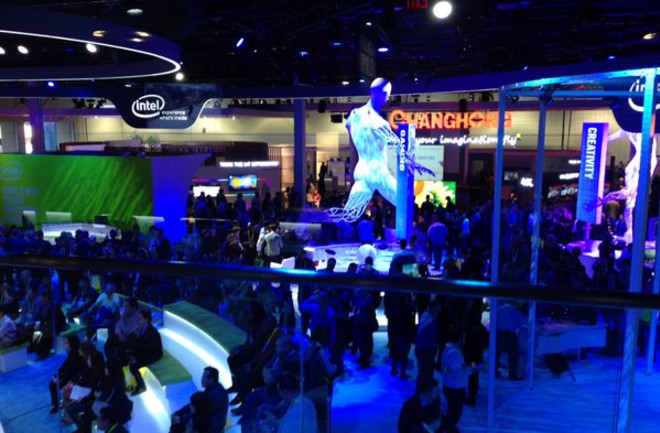 (Credit: Tim Kidwell) The Consumer Electronics Show, held this year in Las Vegas, is the yearly event where tech companies gather to flex their muscles as they show off new and revolutionary tools, gadgets, appliances, and the occasional smell-based alarm clock. This year’s show was no exception, with smart fridges, wearables and drones taking center stage, as well as a host of other concept technologies. Discover cut through the noise give you a glimpse at five of the more exciting new products to come out of CES 2016:

Faraday Future FFZERO1 Concept vehicle at FF's pre-CES reveal event in Las Vegas on Monday, Jan. 4, 2016. (Credit: Bizuayehu Tesfaye/ AP Images for Faraday Future) Although built more as a statement than a product, the FFZero1 was certainly one of the most striking displays at CES this year. Looking something like a Lamborghini crossed with the Batmobile, the fully electric car is purported to have over 1,000 horsepower and is capable of reaching speeds in excess of 200 mph. Don’t expect to see these cars flying by you on the freeway anytime soon though. Faraday Future, the Chinese-backed company that built the FFZero1, stated that it this car was built to showcase technologies they plan to incorporate into mass-production vehicle models, such as smartphone controls and their unique Variable Frame Architecture. This modular framework includes a string of batteries and an adjustable frame that can be easily modified during production to create different styles of automobile.

LG's new OLED display rolls up like a newspaper. (Credit: LG) Along with their OLED displays, LG this year unveiled a high-definition screen that you can roll up like a sheet of paper. The 18-inch screen can be flapped, bent and generally abused in all sorts of ways, all the while displaying a clear image. Someday we may simply roll up the television and put it in the corner when it's not in use, but this screen is still an early a prototype. Currently, the screen can only be rolled from one direction, and is limited to the 18-inch size.

The Vive headset. (Credit: HTC) HTC’s Vive virtual reality headset is another product that falls into the “futuristic tech” category. Along with other virtual reality headsets from Oculus, Samsung and Playstation, the headset gives users the chance to step into another world from the comfort of their living rooms. The headset uses two remote tracking sensors and handheld controllers to place you in another world. Prepare to fight off alien invaders and cross swords with orcs in an immersive environment. Along with a gyroscope and accelerometer, the headset features a 90 frames per second resolution and includes a front-facing camera that snaps you back into the real world — so you don’t stumble over every chair in the room.

The SCiO analyzes a tomato. (Credit: Consumer Physics) It's the product you never thought you needed. The SCiO food scanner uses near-infrared spectroscopy to analyze and report on the content of your food and can report its calories and nutritional content. The device, from Consumer Physics, reads the unique vibrations of molecules exposed to infrared light and, in conjunction with an online database, uses this information to tell you exactly what’s in that sausage you’re buying. The SCiO communicates with you via an app that provides readouts of all the information it gathers.

The Withings thermometer takes your temperature from your temple. (Credit: Withings)Withings, which also debuted an activity tracker called Go at CES this year, created a thermometer that only needs to be pressed against the temple for an accurate reading. The non-invasive design is ideal for babies and small children, the company says, and includes a readout screen on the side. The consumer-friendly device uses an infrared sensor to measure black-body radiation, a temperature-dependent form of electromagnetic radiation. Although such devices already exist, they are bulky and used mostly in industrial settings.