4 of the Hottest Drone Projects on Kickstarter 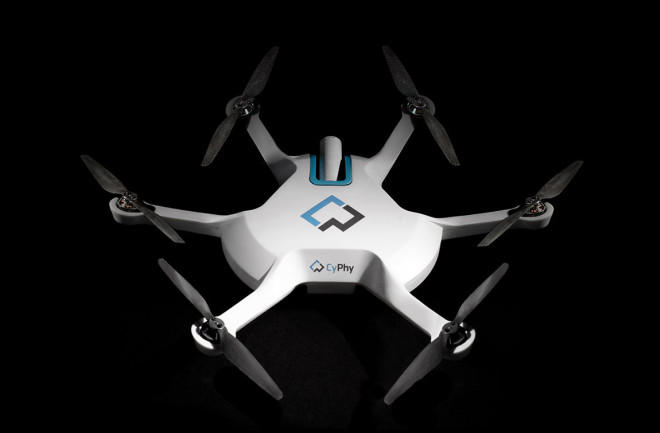 It seems like every team these days is turning to Kickstarter for crowd-based funding, and for drones it’s no different. Here, we’ve sifted through the current contenders to find four ongoing projects that just might be worth the price tag to get access to some cutting-edge drones.

Helen Greiner, cofounder of the company that brought us the Roomba, is getting into the drone game. People are buzzing about this new drone loaded with some awesome autonomous capabilities. With 13 days left to go in the campaign, the CyPhy has already doubled its fundraising goal of $250,000.

The CyPhy’s flight control and flight programming are what make this drone very cool. The drone uses six rotors rather than the more common four, which means the CyPhy doesn’t tilt when it’s accelerating, it doesn’t require a gimbal, and it remains steady during shoots.

CyPhy is controlled with an accompanying smart phone app, which also allows you to set up a geo-fence to keep your drone within a set boundary. Therefore, there’s no need to worry about an inexperienced pilot sending your drone off to no-man’s land. If the CyPhy reaches its stretch goal of $750,000, they’ll add a whole new suite of autonomous behaviors, such as orbit mode, which will automatically capture wraparound video. They’ll also program the drone to travel a specific path, which you can chart by simply walking.

There’s still time left to pledge, but the many of lower-priced options are already off the table. The first global shipment of the CyPhy is planned for February 2016.

Sure, the Aexo Aerial Exoskeleton might look like you’re flying a box fan, but it could make your drone indestructible. The Aexo’s frame is constructed with high-quality aluminum, so it’s lightweight but strong enough to keep your drone from shattering when it hits a tree.

The kits appear to come with the parts needed to retrofit the frame onto DJI drones, or you can simply lock in a pledge to receive a readymade protector drone. There’s still time this month to get in as a backer, and if you pledge $278 or more, you’ll get the Aexo motocross frame sent to you, but there are plenty of other opportunities at all funding levels.

Inside the protective cage, the rotors still spin freely and you won’t be able to fit a finger through the frame’s gaps. Enrique Iglesias, you may want to think about becoming a backer.

Do you know a future drone enthusiast who’s just looking to crack into the hobby? Eedu is the perfect educational drone kit to inspire any budding pilot or engineer. First, you assemble Eedu (a wrench is all you need). Then, a simple coding interface lets you tell the drone to dance to the beat of a song, using a midi music file. Finally, turn Eedu on, and watch it dance.

There are plenty of pledge opportunities available in a number of price ranges, and 26 days left to get in. The first early-bird specials will be sent out December 2015.

Can’t choose between a ground-based speed demon and a quadcopter? The B-Unstoppable tank-quadcopter hybrid is the solution. Rocks, wood planks or a rolled up yoga mat are no match for the B-Unstoppable, and, of course, it could always fly over any hindrance. The lightweight drone can carry an FPV camera, which will certainly add a new twist to FPV racing.