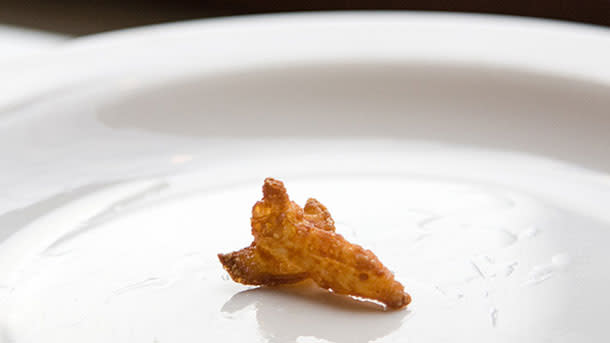 Most people outgrow the days of carving rivulets in mashed potato mountains or castles out of seasoned squash---but scientists aren't "most people." One ragtag team of researchers and culinary experts are harnessing the power of 3-D food printers to bring the science of playing-with-your-food to new levels, such as outer space. In a project called fab@home, Cornell's Computational Synthesis Laboratory and the French Culinary Institute have made a giant leap for mankind by fashioning a miniature space shuttle made of pureed scallops and cheese. So what does it take to create such intricate food sculptures? Cornell graduate research student Jeffrey Lipton told CBC News:

"The process is pretty simple ... Just as ... your 2D printer puts droplets of ink onto a page to create an image, this draws lines of material on top of each other to create a 3D object."

It's the same technology as rapid prototyping machines, except you're switching in food pastes for plastics and metal. Precisely-positioned nozzles squirt out edible creations of virtually every flavor, and so far, the lab has tackled various foodstuffs, including cheese, chocolate, hummus, and turkey. But interesting shapes and flavors isn't the only thing they're interested in; the technique also opens up new possibilities for textures. Simply by having the machine print random squiggly lines, they've created new varieties of crispy corn snacks. And if you were to feed pureed meat into this 3-D printer, the researchers even think it's possible to create a meatloaf-like substance that's as absorbent as a sponge. With the successful launch of miniature space ships, it appears that the future of 3-D food technology is wide open---paving the way for a future where parents actually encourage their kids to play with their food. Related Content Discoblog: The Closest Humankind Has Come to the Star Trek Food Replicator Discoblog: Robot, Build Thyself: Machine Made of Lego Builds Models Made of Lego DISCOVER: Just How Nasty Is Space Food? Science Not Fiction: You Got Genetic Engineered Fish in My Dish!