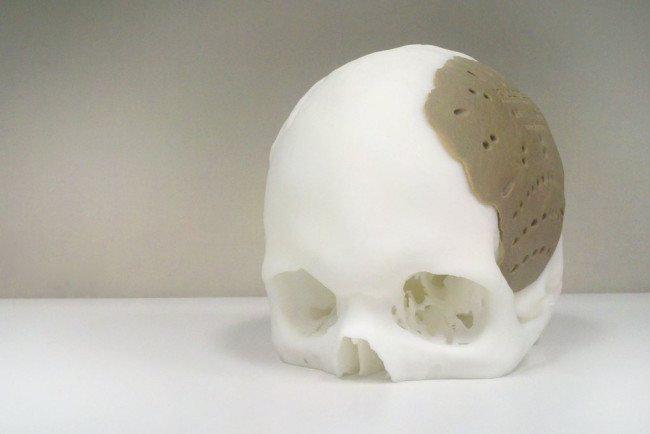 There is no shortage of new and interesting uses for 3D printing technology. This week one more has been added to the list, and it's pretty darn impressive: replacing 75 percent of a patient's skull with a 3D-printed implant.

The skull implant was approved by the FDA last month, and the surgery itself took place on March 4, as reported

by Tech News Daily. The implant was made from a type of thermoplastic

called polyetherketoneketone (PEKK). This material is moldable above a certain temperature, and returns to a solid state when it cools. Unlike most plastics, thermoplastics' long polymer chains do not break down during the melting process. As with all 3D printing, the process begins with a digital scan to use as a blueprint. In this case that would be a CT scan or MRI of the patient's skull. Then the printer makes a new version of the skull's missing piece, layer by layer. The printed version mimics a real skull in many ways, but also adds detailing on the surface and edges of the implant to encourage cell growth. This can also help existing bone attach to the implant more easily. The patient-specific products can be cranked out in about two weeks. Patients who have suffered car accidents or head trauma would benefit from this technology, as well as those with cancerous bone tissue in the skull. And unlike existing implants made from materials like titanium, the plastic implants are light, non-corroding and won't set off the metal detector at the airport. The 3D-printed implant was manufactured by a Connecticut-based company called Oxford Performance Materials

. Although the company already ships its 3D-printed implants overseas, this marks the first time such a surgery has been given the go-ahead in the U.S. In the future the company hopes to expand its production to include replacements for all kinds of bones in the body. Image courtesy of Oxford Performance Material