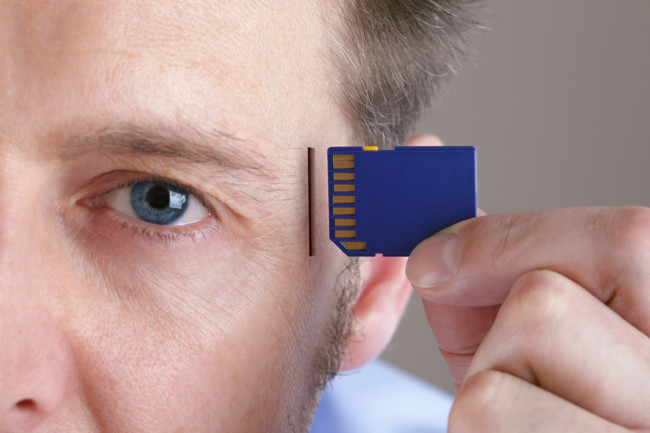 Scientists are only beginning to advance memory-enhancing technology research, but even in this early stage, there are questions that deserve consideration. (Illustration credit: Brian A Jackson/Shutterstock) In fall, DARPA announced a major success in its Restoring Active Memory (RAM) program. Researchers implanted targeted electrical arrays in the brains of a few dozen volunteers — specifically in brain areas involved in memory. The researchers found a way to read out neural “key codes” associated with specific memories, and then fed those codes back into the volunteers’ brains as they tried to recall lists of items or directions to places. While the results are still preliminary, DARPA claims that the RAM technique has already achieved “promising results” in improving memory retrieval. Intriguing as this implant is, it’s only the latest in an ongoing series of neurological techniques and gizmos designed to boost and sharpen memory. The effects and implications of these systems raise questions that are worth consideration.

The Burden of Perfect Memory

In 2005, a team led by Alcino Silva at the University of California, Los Angeles engineered a strain of mutant mice that looked and behaved like regular mice, but certain neurons in their brains fired more actively. Mice with these active neurons learned about three times faster than normal mice. Their memory was more accurate than that of any other mice on the planet. You might be thinking, “Hey, I could use some of those genetic tweaks!” But you should know how researchers tested this. They used a very common form of learning experiment: They gave the mice a mild electrical shock in certain cages, but not in other ones. Normal mice needed a few tries to learn to fear shock cages, but not Silva’s mutant mice. After a single shock, the smart mice “froze in fear” every time they were placed in the scary cages. Perfect memory, then, is a double-edged sword, and not just because of the risk of lifelong PTSD as a result of one painful experience, like the mice getting shocked in their cage. Take the famed case of Solomon Shereshevsky, a patient who participated in a wide range of studies in the 1920s after researchers discovered his ability recall just about everything. Shereshevsky could recite long poems in languages he didn’t speak, reproduce complex mathematical formulas he didn’t understand and repeat long-ago conversations word for word. Problem was, Shereshevsky’s memory was so powerful that the constant flux of reality drove him crazy. He had trouble recognizing people by their faces, which he described as “very changeable” from one day to the next. Toward the end of his life, he took to writing his memories on paper only to burn them. Maybe there’s a golden mean in memory power. Where should we draw the line?

If you’ve ever tried to remember a list of errands someone’s reciting to you while you’re driving in an unfamiliar area, you know how frustrating it is to try to use two different kinds of memory at the same time. As you attempt to build a mental map of local landmarks, your brain is also laboring to hold the list of errands in your working memory — both tasks suffer as a result. But what if you had a brain implant that could grant you perfect recall of each task? In 2011, a team led by Harvard neuroscientists Edwin Robertson and Daniel Cohen used a technique known as transcranial magnetic stimulation (TMS) to take a step in that direction. They managed to prevent interference between competing forms of memory, enabling volunteers to memorize lists of items, and learn new motor tasks, in quick succession without either form of memory losing its sharpness. Imagine having an implant that does this for you all the time. Instead of breaking in between tasks, you could learn a new set of driving directions, memorize a grocery list, and, just for fun, learn a dance routine, all without requiring any down time. Every step would stay as sharp in your recall as it was at the moment you learned it. If you could essentially be in cram mode all the time, why ever stop? Most of us spend hours every day learning information — phone numbers, addresses, Excel formulas — that we'd just as soon forget once the task is completed. But if you had the option to keep your memory turned on all the time, would you? Or are there some memories that are better to forget – or simply not necessary to remember?

The Treadmill of Competition

Uploading knowledge directly into someone’s brain sounds like science fiction, but in 2001, teams of researchers at Boston University and ATR Computational Neuroscience Laboratories in Kyoto, Japan did exactly that. The teams used functional magnetic resonance imaging (fMRI) to scan volunteers’ brains as they watched a series of short movies. They gradually built up a library of brain activation patterns that corresponded to specific colors, shapes, and angles of orientation. Next, the researchers used a neurofeedback device to activate the patterns corresponding to certain angles in the volunteers’ visual cortices. And when the researchers asked the volunteers to pick out shapes that matched the orientations they had “learned,” the majority picked out shapes that matched orientations that were fed into their brains. Now, transmitting orientations of shapes into the visual cortex is a far cry from a full-blown “I know kung fu” moment. But what if scientists develop something simpler, such as an implantable device that primes your brain to remember driving directions or acquaintances’ names? “Sign me up,” you might be saying. And why not? Why not sign the whole family up? Your neighbors, and everyone else in the neighborhood, will probably want it for their kids, too. Now everybody’s kids are headed for the Ivy League, and all is well in the neighborhood, but what happens to the kid whose parents couldn’t afford it? In short, if supercharged memory comes within reach, is it a human right? If a few parents choose not to get memory implants for their children, is that child abuse? Some of these questions might seem a little over-egged right now, and maybe all this stuff is still too far off and we’ve got nothing to worry about. But consider this: all of these technologies were developed within just the past decade. The field is in its infancy, but one day, strange as it might sound, your children — or their teachers or doctors — could come to you with pointed questions about memory implants. What would you say if that time comes?