3-D Printing Robots Will Build a Bridge in Amsterdam 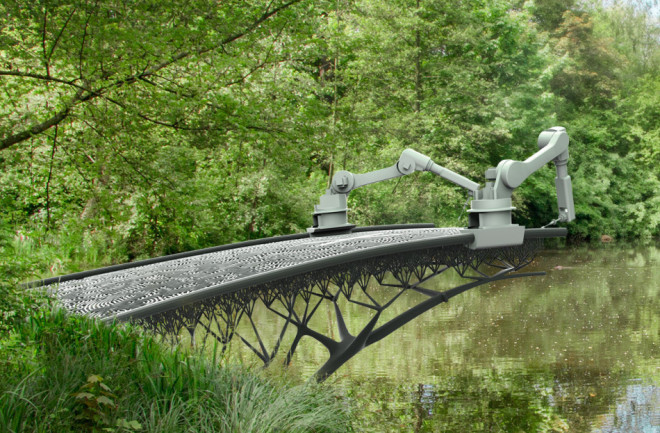 An conceptualization of MX3D's printers in action. (Credit: MX3D) A 3-D printer that makes steel structures appear out of thin air will try its hand at building — wait, printing — a pedestrian bridge. MX3D is a Netherlands-based start-up that researches and develops 3-D printing technologies. Later this year the company is planning its most ambitious project yet: Using 3-D printers to construct a bridge over a canal in the heart of Amsterdam.

Build Me a Bridge

The MX3D team essentially takes everything you know about 3-D printing and turns it on its head. The traditional process would be this: Printers build objects from the bottom up by applying layer after layer of plastic goop from dispenser that shuttles back and forth along a horizontal plane. The end product has telltale layers that sort of resemble a topographic map. This is not how MX3D printers work. Instead, the MX3D-Metal printer builds structures by ejecting small amounts of molten steel through a welding nozzle at the end of a 6-axis robotic arm — it can craft objects from any angle, rather than simply along a horizontal plane. As molten metal flows through the nozzle, it quickly sets, which allows the printer to produce straight lines, spirals or any other shape for that matter, out of thin air. “3D printing like this is still unexplored territory and leads to a new form language that is not bound by additive layers. This method makes it possible to create 3D objects in almost any size and shape,” wrote MX3D on its website. You can get an up-close look at the metal printer below:

For their bridge, the team plans to use two teams of two robots. The teams would start on opposite sides of the canal and build until they meet in the middle, constructing their own supports along the way while moving forward on movable platform bases. The final design of the bridge and its exact location are still to be determined, but construction is expected to begin in September.

The project is about much more than just a bridge; it could serve as a glimpse into what future construction sites might look like. Rather than workers in hard-hats and neon yellow vests, autonomous 3-D printers might be the new norm. If we can 3-D print a bridge, Gizmodo’s Maddie Stone points out, why not build a skyscraper with 3-D printing cranes? The MX3D team seems to agree with the broader impact their bridge project could have, as they state on the project website:

This bridge will show how 3D printing finally enters the world of large-scale, functional objects and sustainable materials while allowing unprecedented freedom of form. The symbolism of the bridge is a beautiful metaphor to connect the technology of the future with the old city, in a way that brings out the best of both worlds.

Although MX3D has tested their bridge-printing robots on smaller scales, they’ll likely face a host of new challenges once the project gets started. Their bots will have to contend with irregular terrain, changing weather conditions and other factors that are typically controlled in the lab. We’ll just have to wait and see if MX3D's bridge leads to new possibilities for the technology, or if they simply ended up building a bridge to nowhere.