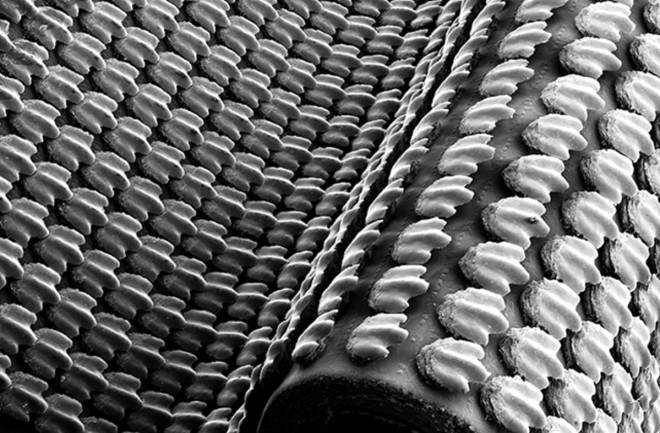 Artificial shark skin with rigid denticles attached to a flexible membrane. (Photo credit: James Weaver.) Expert swimmers may want to rethink their choice of swimwear. While many a swimmer dons smooth, high-tech spandex, it turns out that one of nature's fastest swimmers---sharks---actually have rough skin. And now, swimmers will be happy to hear, researchers have developed a fake shark skin. It's been known that shark skin is comprised of millions of microscopic, overlapping scales. Called denticles, they disrupt the flow of water over the animal's body, reducing drag. But to figure out exactly how these denticles boost speed, researchers needed to test how altering the skin affects how water moves across it. So they built a synthetic one.

"You can't modify real shark skin," explains George Lauder from Harvard University, one of the authors of the study, published Wednesday in the Journal of Experimental Biology. Lauder found a piece of mako shark at a local fish market, and scanned the skin to create a high-resolution view of the surface. Next, he and his team zoomed in on a single denticle to build a detailed model of its structure, and then reproduced it thousands of times in a computer model. But they needed to build a real model. To do that, they constructed a realistic artificial skin using a 3-D printer, which allowed them to embed hard denticles in a flexible substrate---after some trial and error. "The denticles are embedded into the membrane and overlap, which posed a key challenge for 3-D printing," Lauder says. Finally, after a year of testing different materials, sizing and spacing, the team produced a convincing fascimile. "Seeing the SEM [scanning electron micrograph] of the curved membrane with the denticles was a great moment for us," Lauder says.

After printing the artificial skin, they put it to the test in a water tank. A flexible paddle fitted with the new skin delivered a 6.6 percent boost in swimming speed compared to one with a smooth membrane. Further, the shark skin allowed the paddle to travel the same simulated distance using 5.9 percent less energy. But don't expect to see swimmers sluicing through the water in denticle suits anytime soon. Says Lauder: "The manufacturing challenges are tremendous."