3 Amazing Science Projects from Around the Globe

Attaining superhero strength in real life Salt Lake City—Need to change a tire on a giant military vehicle? Hoist a 200-pound missile into a plane? Snap on an exoskeleton and you’ll get the job done without even breaking a sweat.

A high-tech mechanical suit worthy of Marvel Comics’ Iron Man, the exoskeleton is taking shape in the research facilities of Raytheon Sarcos in Salt Lake City. Combining cutting-edge microelectronics and robotics, it consists of upper and lower extremities that can easily be stepped into, secured, and operated with only minimal training. The exoskeleton has hydraulically powered joints that fluidly mimic human movements and sensors that detect and automatically adjust to the wearer’s motions. For example, if the user wants to lift something, the device senses the upward movement of the arms and dramatically boosts their lifting capacity.

The technology is the brainchild of Stephen Jacobsen, a mechanical engineer at the University of Utah, nurtured with funding from the Department of Defense, which—no surprise—wants its soldiers to have the power and endurance of superheroes. Currently the exoskeleton must be tethered to an energy source such as electricity or a fuel-powered engine—an untenable hindrance in combat. So a major focus of research is to develop a power pack that can safely be worn on a soldier’s back. Future versions of the exoskeleton may also have armor plating. A soldier with this added protection might be sent, for instance, to rescue a comrade in a burning Humvee in the midst of enemy fire, says Ross Guckert, director of systems integration at Program Executive Office Soldier in Fort Belvoir, Virginia.

Expected to debut in the field around 2015, exoskeleton technology might not be a match for a fictional superhero. But it should live up to every child’s fantasy of having legendary powers.

Exploring the cosmos in an ice cube South Pole—Trust physicists to think of creating an observatory out of a block of ice—and to actually be close to realizing the scheme. Dubbed IceCube, this novel project built in the Antarctic ice will map cosmic neutrinos, nearly massless particles with no electric charge that stream from such mysterious entities as black holes, dark matter, and exploding stars. “Shifting our focus from photons of light to neutrinos will open a new window on the skies,” says Francis Halzen of the University of Wisconsin at Madison, IceCube’s team leader.

Since 2002 a multinational team has been building the neutrinotelescope quite literally out of a one-kilometer cube of ice deep under the South Pole. When a neutrino traveling through the earth collides with an atom in a molecule of ice, a little nuclear reaction can occur, producing blue light. The cube’s basketball-size light sensors detect these tiny reactions and determine the path along which the neutrino was traveling. Through holes drilled from the surface, cables strung with 60 such sensors each have been lowered approximately 1 to 1.5 miles down. Though it is at least two years away from completion, IceCube is already collecting data.

Detecting cosmic neutrinos is extremely difficult, Halzen says. Because these ghostly particles have no charge, they pass through the earth without interacting with matter the vast majority of the time. In the rare instances­ when they do collide with atoms, the evidence is so faint that it can easily be obscured by radiation from other sources. To filter out such background noise, IceCube’s designers have used the earth as a shield, pointing the sensors downward and looking right through the planet toward the sky over the Northern Hemisphere. Neutrinos coming from the northern sky pass through the earth, and when they reach the Antarctic those sensors detect them. Halzen and his team can then create a map detailing where in space the particles have come from. That map should identify the locations of violent cosmic events—and perhaps locate exotic new objects that are invisible to ordinary telescopes. “We’re at the threshold of the promised land,” Halzen says. “Nobody has done this before. We may be shocked to see neutrinos coming from totally unexpected sources in the universe.” 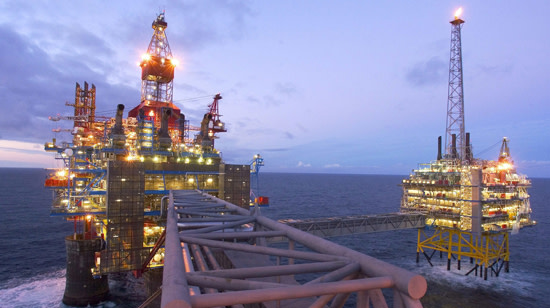 Storing CO2 Under the Sea

North Sea, 150 Miles off the Norway Coast—The latest, greatest hope for reducing greenhouse emissions is to capture carbon dioxide at the source and bury it underground. But what is the evidence that the approach will actually work? In a word, Sleipner.

That is the name—taken from an eight-legged horse in Norse mythology—of a pioneering project developed in stages since 1996 at an offshore natural gas platform in the North Sea. It is operated by StatoilHydro, Norway’s chief gas and oil company. In response to a tax on greenhouse-gas emissions imposed by the Norwegian government, each year the company now removes about 1 million tons of CO2 captured as a waste product from the natural gas it recovers and pumps more than 99 percent of it 2,600 feet beneath the seafloor into a porous sandstone formation capped by impervious rock. And there the CO2 has stayed.

“The company did a great job bringing in experts from all over the world to evaluate what they were doing,” Stanford University hydrogeologist Sally Benson says. “As a result, we can say with great confidence that CO2 leakage is not a problem at the Sleipner site.”

Inspired by Sleipner’s success, similar carbon capture and storage (CCS) projects are being launched in the Arctic Circle, Algeria, Australia, and Canada. For now, most of these enterprises primarily involve harvesting natural gas, an operation that can absorb the cost of disposing of the CO2 that comes up with the gas. Industries that face higher costs in converting to CCS—heavy carbon spewers such as power stations, petrochemical plants, steel mills, and cement factories—have rarely followed suit. But with proper tax incentives, they may soon sign on too.

The extended Sleipner area has more than enough capacity to store all of Norway’s CO2 emissions for many years and potentially could also store a portion of the rest of Europe’s CO2 emissions well into the future—by which time clean energy technologies may have rendered CCS obsolete.