When IBM’s game-playing computer trounced two trivia experts, its victory was hailed as a landmark for intelligent machines.  A Jeopardy! champ explains why the real winners were humans. 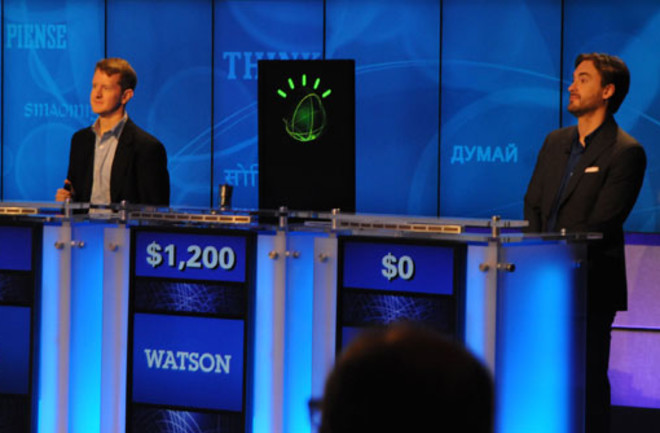 February’s epic, three-day matchup between IBM’s Watson computer and Jeopardy! grand champions Ken Jennings and Brad Rutter was billed as a contest of man versus machine. But as a former Jeopardy! champion keenly aware of Watson’s speed and vast memory, I suspected this contest was about something bigger: Rosie versus Hal.

Rosie was the maid on TheJetsons. Tireless and always helpful, she represented a vision of the robot as high-tech assistant. hal 9000, from 2001: A Space Odyssey, was her opposite, a rogue computer bent on achieving its own ends. Which one was Watson?

The supercomputer wasn’t scheming to take over the world or walking someone’s dog on an outer-space treadmill, of course. But its success speaks to debates at the core of the field. How is artificial intelligence defined? What are its ultimate goals?

On Jeopardy! the usual question-answer trivia format is reversed. Host Alex Trebek reads a clue, such as, “While Maltese borrows many words from Italian, it developed from a dialect of this Semitic language.” The first contestant to press the buzzer can respond and must do so in question form: “What is Arabic?”

Most search engines look for keywords. Google might pull up pages on the origins of Maltese.

But with its advanced language processing, Watson can pick out the type of response required. It looks not just for where the answer may be but what it is—in this case, a language.

Once Watson determines what to look for, it starts sifting through its 68 million pages’ worth of memory for answers, using complex algorithms and previous experience to evaluate the possibilities. Watson ranks its answers and computes how confident it is in each. If it’s confident enough in its top answer, it buzzes in. The process from clue to buzz takes about three seconds.

But was Watson truly an ai landmark? That depends whom you ask. Some see it as a way to solve problems. Watson’s language processing, knowledge representation, and reasoning have made a huge contribution to this camp. Others want to make machines smart in the same way we are, able to think creatively. “Even if Watson were scaled up, it wouldn’t be humanlike in its intelligence,” says Melanie Mitchell, a computer scientist at Portland State University. Sophisticated algorithms might help a computer detect humor, but it still won’t get the joke.

David Ferrucci, head of the IBM team that developed Watson, doesn’t think computers need to be flexible thinkers; he is firmly on the problem-solving, Rosie side of things. “My goal was to simply solve a task,” he says.

Ultimately, Watson is a powerful search and data analysis agent. And it now has a chance to show its stuff. Health insurance company WellPoint hired it in September to help doctors make diagnoses and suggest treatments by quickly scanning clinical guidelines and medical records.

Rather than pitting ourselves against computers in feats of sheer memory, the key is to go with our strengths, such as humor and reasoning, says Stephen Baker, author of Final Jeopardy: Man vs. Machine and the Quest to Know Everything. Newer game shows like The Apprentice and Project Runway are already moving in this direction. Watson is an early step toward a future in which computers do all sorts of data-intensive heavy lifting, leaving us more time for uniquely human pursuits, like getting fired by Donald Trump.