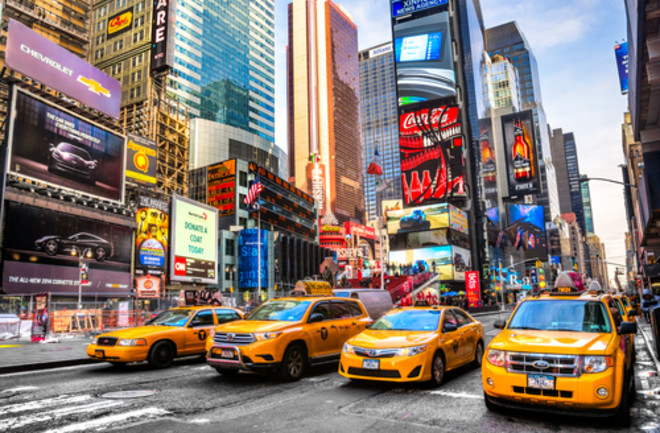 (Credit: Luciano Mortula/Shutterstock) New York City taxis, they ain't so smart — yet. A new study from MIT's Computer Science and Artificial Intelligence Laboratory (CSAIL) estimates that just 3,000 ride-sharing cars guided by an algorithm could serve the needs of busy New Yorkers. That's compared to the roughly 13,500 taxis currently in operation in the city, famous for its frenzied rush hours.

May I Have This Ride?

The researchers used taxi data from the University of Illinois spanning 2010-2013 for their analysis, and constructed an algorithm that matched together riders heading the same direction to minimize the number of trips each car had to make. Not only can the system put similar riders together, it can also dynamically allocate cars to high-traffic areas — say, Yankee Stadium during the ninth inning. The researchers say their system requires an average wait time of only 2.8 minutes, and would add just a few minutes to trips. They published their work in the Proceedings of the National Academy of Sciences. Allowing for a more diverse selection of cars reduces the number necessary even further — just 2,000 10-passenger vans could cover 95 percent of the need, and a combination of different kinds of vehicles could be even more efficient.

The system relies on integer linear programming, a computing method that lists all of the requests and vehicles available and then matches that to all of the possible routes. Any vehicles left over get sent to areas where more cars might be needed soon, to cut down on wait times. The researchers say that their system, especially when paired with self-driving cars, would cut down on traffic jams, air pollution and travel times. Companies like Uber and Lyft do already offer ridesharing options to customers, although only in select cities. UberPool and Lyft Line let users choose an option to share their trip with others going in a similar direction in exchange for a reduced price. The system has been met with mixed reviews, especially from drivers, who lose out on money when they combine trips. Nevertheless, the concept of ride-sharing seems to be gaining traction, with Uber reporting 50,000 ride-shares in one week in New York City alone, and Lyft estimating that around a third of its rides there are shared. Each company relies on proprietary software to create routes, but, as this latest study shows, the concept is solid. As long you're fine with spending your morning commute confined to a metal box with complete strangers, of course.