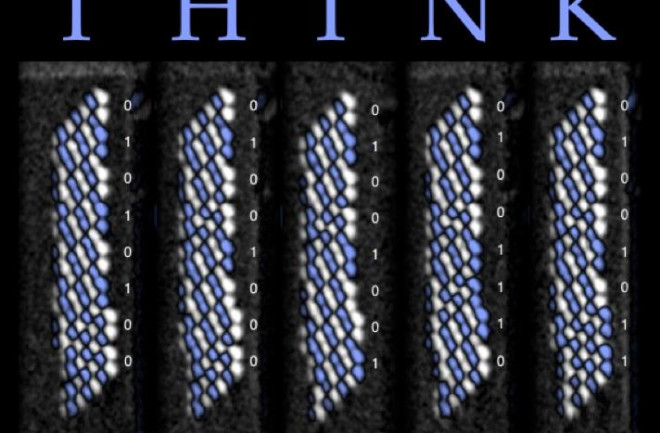 As our electronic devices get ever smaller and more powerful, they are generating mountains of data—documents, pictures, videos, and so on. Where are we going to put it all? Andreas Heinrich at IBM Research-Almaden in California, has a solution. This past year his team announced that they had created the world's smallest magnetic memory, storing one bit of data (recorded as a 0 or 1) on just 12 iron atoms. Today's hard drives need about 1 million atoms to do the same.

Heinrich used a scanning tunneling microscope to align the iron atoms so each one takes on a magnetic polarity opposite that of its neighbor. Such an alignment cancels the overall field. As a result, the data-storing groups of atoms—which record information magnetically—do not interfere with each other. The units of data storage can then be packed together more than 100 times as densely as on existing microchips. Heinrich highlighted his breakthrough by configuring 96 iron atoms five times, with each configuration representing one byte of code, to spell IBM's motto: T-H-I-N-K.