From congested lanes on freeways to motor enzymes navigating DNA, traffic (and the occasional roadkill) is part of life. 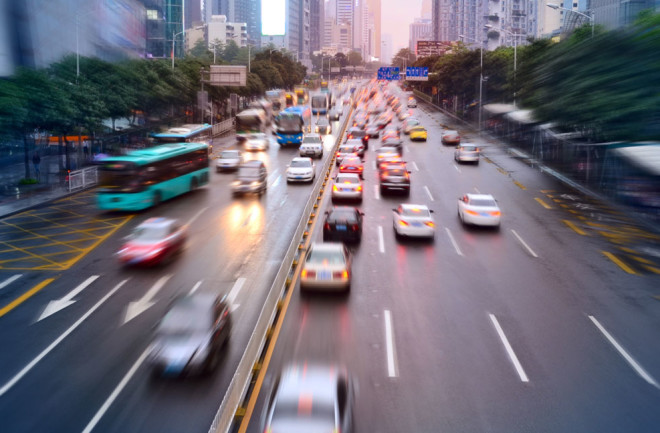 1. Is your daily slog through a non-equilibrium system of interacting particles — how physicists define vehicular traffic — getting you down? Us too, especially when it slows for no apparent reason.

2. According to a study in the New Journal of Physics, traffic jams develop spontaneously when vehicle density exceeds a critical level, beyond which minor fluctuations in the flow of individual vehicles destabilize the whole thing.

3. In fact, even construction or an accident isn’t directly responsible for congestion; the cause is the increase in vehicle density.

4. Traffic jams predate the automobile. William Phelps Eno, a pioneer of vehicular traffic control in the early 20th century, wrote about gridlock caused by horse-drawn carriages on the streets of his native New York City in the 1860s.

5. Also nothing new: judging others on the road. “I don’t think I ever went on the streets of New York nor of any other city or town without being astonished at the stupidity of drivers, pedestrians and police,” Eno wrote in 1939.

6. Traffic has been an issue since the first single-celled organisms. Motor enzymes are constantly moving around the crowded DNA streets of every living thing to copy or repair genetic code, a process called molecular traffic.

7. And yes, even on this minute level there are roadblocks and collisions (imagine the tiny orange cones!) that can disrupt replication and other processes crucial to genomic stability.

8. In even simple organisms like bacteria, however, researchers have observed a distinct molecular traffic flow to reduce head-on collisions between enzymes engaged in different tasks.

9. If enzymes can figure out how to go with the flow, why can’t we? About 1.25 million people die every year in traffic accidents, according to the World Health Organization.

10. Half of those killed are defined as vulnerable road users: people on foot, bicycle or motorcycle.

11. Self-driving cars may soon increase traffic safety — or just seem to do so. A recent study presenting different accident scenarios found that people were less likely to blame an automated car, even when it was at fault, than a human driver at fault.

12. You don’t even have to be in traffic to suffer from it. A 2016 multiple-study review linked traffic pollution to asthma, pulmonary disease, eczema and even food allergies.

13. Another 2016 study found that high exposure to traffic pollution and noise was associated with daytime sleepiness and nighttime snoring.

14. But traffic poses even bigger problems for other species, particularly birds: Worldwide, it kills about a quarter of a billion of the animals annually.

15. Some birds, though, have adapted. Roadkill-noshing crows, for example, will pause their meal and fly straight up or walk to a different lane as traffic approaches.

16. And a 2013 study found that several species of common European birds adjust the timing of their takeoff to avoid oncoming traffic based on the speed limit of the specific stretch of road.

17. It’s difficult to pinpoint how many land animals are killed by vehicular traffic annually — no single entity keeps track — but over a 17-month period, one study documented more than 8,000 fatalities along a 1.1-mile stretch of road in Indiana.

18. In 2015, a Wildlife Research paper found roads with gentle grades and wider lanes and shoulders have the highest risk of wildlife-vehicle collisions. High visibility may encourage drivers to speed, a known crash risk.

19. Roads break up habitats and block migration routes, but as our species continues to expand, some researchers are asking which is better for wildlife: more traffic on fewer roads or less traffic on more roads?

20. One 2014 study based on modeling animal movement found that increasing vehicle density on existing roads, rather than adding more roads with lower density, resulted in fewer wildlife fatalities. Good for them — and more traffic for us.