From chemicals to cars, 3-D printing may be the manufacturing method of the future. 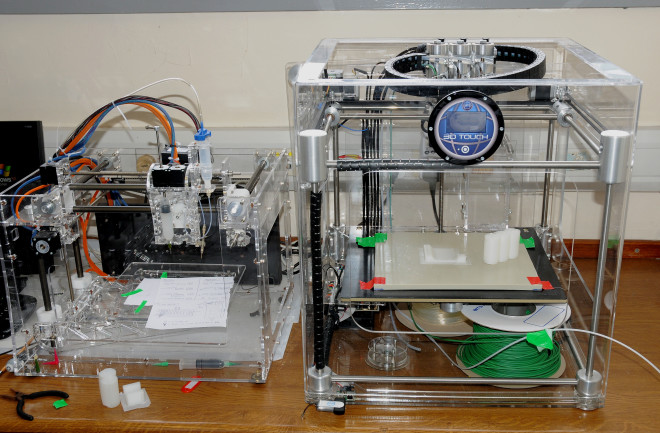 Its use long confined to tech-savvy engineering students and Silicon Valley tinkerers, the 3-D printer has suddenly morphed into an off-the-shelf technology, with big implications for R&D and society at large. The printers, which create physical objects directly from digital renderings, could revolutionize the manufacture of everything from pharmaceuticals to automobiles.

In one notable application, chemists at the University of Glasgow last year developed a method [pdf] for assembling chemical compounds using open-source software and a pair of $2,000 3-D printers. One printer’s robotically controlled syringe deposited gels that hardened into half of a reaction vessel. A second printer painted chemical compounds into the shell, which was sealed by the first printer. The compounds then combined in the completed reaction vessel, creating new, previously unsynthesized chemicals.

As a test, the Scottish team soon plans to use a similar process to create a common painkiller, ibuprofen. In the future, automated labs outfitted with just a few chemical printers and an Internet connection might make custom-tailored medicines on demand in your doctor’s office, says study author Lee Cronin.

Also this year, a team of Belgian engineers printed a full-sized race car, suggesting a more efficient alternative to assembly lines. In another, more politically charged development, an American gunsmith printed functioning parts for a .22-caliber pistol. Soon after, a group called Defense Distributed generated controversy when it announced a project to create a fully printable 3-D gun and then make its plans freely available on the Internet. The group raised $20,000 before the company from which it had rented its printer revoked the lease and reclaimed it, citing legal issues. Defense Distributed, however, remains committed to its goal of making 3-D printed guns commonplace.