16 Years Ago in Discover: The Future 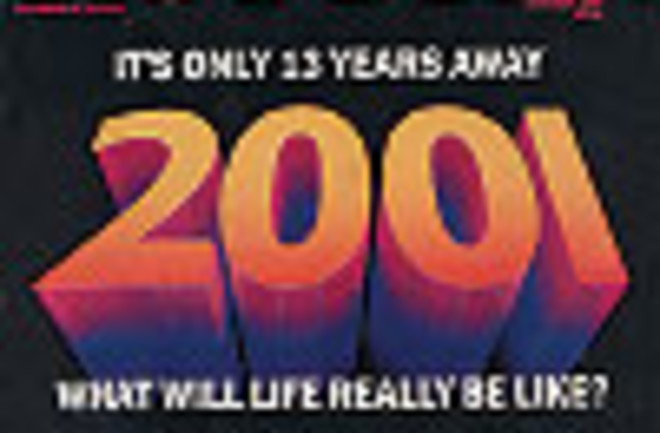 Forecasting the future is always risky. But in November 1988 Discover took the plunge, dedicating an entire issue—19 articles in all—to describing what daily life would be like at the “Dawn of the 21st Century.”

A typical day in 2001, as divined by our reporters, went like this: Wake up. Have a nutritional breakfast of South American tubers with fake fat in your butter and artificial sweetener in your coffee. Leave it to your automated house to do the laundry, water the lawn, and scare off burglars. Commute to work on a magnetic levitating train. Or let your car do the driving using a global positioning system, or GPS. Stop by your robotic doctor for a checkup. If you need a replacement body part, just grow it on yourself. Return to an evening of computer-generated animation or, better yet, a Hollywood film starring you. This last idea excited editor in chief Paul Hoffman no end: “We’ll even be able to play out our deepest fantasies (Meryl, oh Meryl) by inserting ourselves into a film.”

We weren’t altogether off target. Nutrasweet and Splenda routinely sit next to sugar packets in restaurants. Maglev trains jet between Shanghai and its airport, reaching speeds up to 260 miles per hour. Just last August, a man grew his replacement jawbone on his back. GPS devices are now optional in many high-end cars. Computers help doctors do their jobs. Robots even fill out prescriptions in some pharmacies, reducing errors.

We nailed other predictions, including things we said wouldn’t happen. We said fusion power would not be harnessed for energy production, that a passenger plane that could go from New York to Tokyo in an hour wouldn’t be flying, and that the Strategic Defense Initiative wouldn’t be operational. But we didn’t get everything right—especially when we predicted our predictions would be highly accurate. A lot can happen in 13 years.