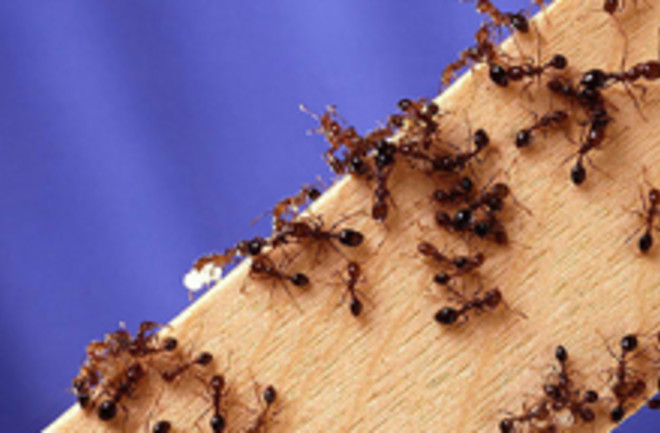 In an ironic twist, the weaponry of the fire ants that have invaded the American South is also their potential downfall. Entomologists have found that the fire ants' venom contains chemical compounds that attract their natural foes, the parasitic phorid flies that turn ants into zombies before decapitating them. The invasive red fire ants first came from South America by boat, and from their original disembarkation point in Mobile, Alabama, they have spread across the South, from Texas to Maryland. Their painful stings and their habit of shorting out electrical equipment make them a serious pest to humans, and biologists have been attempting to control their numbers by importing and distributing the parasitic phorid flies. But until now, researchers didn't know how the flies homed in on the ants. So researcher Henry Fadamiro

hooked electrodes up to the antennae of flies to investigate which of several stimuli prompted nerves to fire. By exposing the antennae to extracts from different ant glands and body parts, the researchers determined that juice from the venom glands got antennae buzzing [Science News].

The study, published in the journal Naturwissenschaften, could help researchers determine where populations of the flies have taken hold in the United States by giving them the ability to make fly traps with the attractive chemicals. While the phorid flies aren't thought to go after native insect species, they target the fire ants in a truly terrifying way. An adult fly lays its egg in an ant's body, and the larva then migrates to the ant's head and devours its brain from the inside. For several weeks the ant wanders aimlessly, until the larva is ready to pupate and

begins to secrete enzymes that decapitate the ant. Scientists aren’t sure why the flies bother to cut off the head. It may serve as an escape pod from residual toxins in the near-empty body [Science News].

More From Discover
Planet Earth
We Still Don’t Know What’s Killing the Birds
The Sciences
How Do Dogs Sniff Out Diseases?
Health
For the Immunocompromised, the COVID-19 Pandemic Isn’t Over
Technology
Competition and Collaboration: Understanding Interacting Epidemics Can Unlock Better Disease Forecasts
Health
The Quest to Make a Vaccine Pill
Health
When Can Kids Get the COVID-19 Vaccine? A Pediatrician Answers 5 Questions Parents Are Asking
Recommendations From Our Store
My Science ShopCosmos: Possible Worlds
My Science ShopStrange Science
My Science ShopEinstein's Universe
My Science ShopElements Flashcards
Shop Now
Stay Curious
Join
Our List