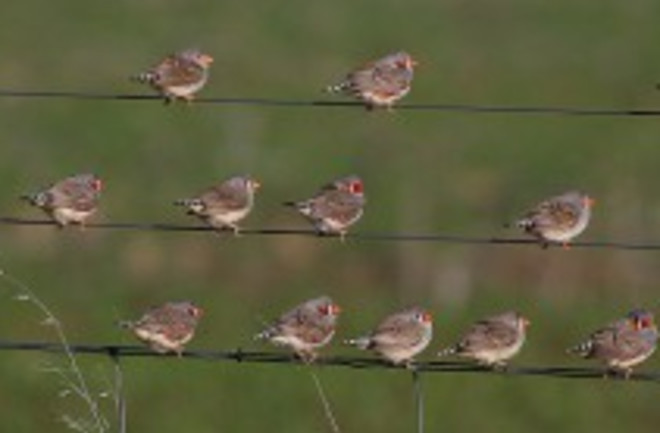 Photo: flickr/patrick_k59Zebra finches are a monogamous species: they form life-long relationships and do not tend to stray from their mates. They are also known to form same-sex partnerships (like many birds, in fact), even in situations where males are present. In this study, the researchers observed pairing preferences in finches under different conditions. They found that in aviaries with equal sex ratios, about 6% of pairs were same-sex, primarily female-female. In a second experiment, they took same-sex pairs that had been formed in same-sex aviaries (i.e., all females or all males) and tested whether the pairs were maintained when the opposite sex was available. They found that while female pairs switched to partner with males, some of the male pairs stayed together. From these results, the authors conclude that same-sex relationships are "more flexible" in female finches than in males.Same-Sex Partner Preference in Zebra Finches: Pairing Flexibility and Choice. "This study examined flexibility and choice in same-sex pair-bonding behavior in adult zebra finches (Taeniopygia guttata). Zebra finches form life-long monogamous relationships and extra pair behavior is very low, making them an ideal species in which to study same-sex pairing. We examined same-sex behaviors using both semi-naturalistic choice paradigms and skewed sex ratios. In the first experiment, we allowed zebra finches to pair in aviaries with equal sex ratios as part of multiple experiments. On average, 6.4 % (N = 78) of unmanipulated pairs were same-sex: all but one was female-female. In a second experiment, we identified pairs from same-sex cages and selected 20 total same-sex pairs (10 of each sex). We then gave pairs a chance to court and pair with members of the opposite sex and observed their behavior for three days. Females did not retain their partner, but most paired with males. In contrast, some males did retain their partner. Similarly, females were more likely to engage in pairing behaviors with males than with their partners or other females whereas males were equally likely to engage in same-sex and opposite-sex pairing behaviors. These findings suggest that same-sex partnerships in zebra finches can be facultative, based on the sex ratio of the group in which they live, but can also be a choice, when opportunities to pair with opposite-sex individuals are possible. Furthermore, it is possible that females are more flexible in this choice of same-sex partnerships than are males." Related content: NCBI ROFL: Double feature: Duck, duck, dick!NCBI ROFL: Parrots are "more human" than chickens.NCBI ROFL: [Ring ring] … Hello? … Hi! Are you a lesbian?