Zapping Worm Brains With Lasers Reveals the Duty of Each Neuron 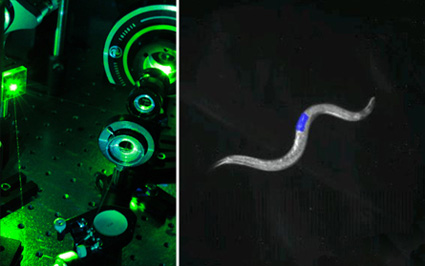 The long wait is over: Scientists have achieved laser-driven mind control over moving, squirming worms. Taking advantage of the emerging technique of optogenetics, Harvard researchers report in the journal Nature Methods that they can target any individual neuron of the tiny transparent worm C. elegans, whether the creature is moving or at rest, and zap it with a laser to see what the particular cell does—move the worm to the left or right, or even cause it to lay eggs.

The whole process, from finding the cell to light hitting its target, takes about 20 milliseconds. As the worm’s position changes, that information is fed back into the computer program, and the laser is adjusted. If the worm crawls too far, a motorized microscope stage brings the animal back. One of the biggest benefits of the new method, [biologist William] Ryu says, is that it works in a roving animal. “The worms are not held down in any way — they’re freely moving. There aren’t many systems where you can look at such truly free organisms.” [Science News]

The transparent outer layer of C. elegans makes it one of the most popular test subjects

in biology, as does its simple structure: the millimeter-long worm boasts just 302 neurons, with about 5,000 connections between them.

But science still does not know exactly "how neurons work together in a network," says Andrew Leifer, a graduate student in biophysics at Harvard, For example, how does the worm coordinate its 100 or so muscles to relax and contract in a wave pattern as the worm swims? [Scientific American]

http://vimeo.com/16933869 Other optogenetic studies have fired lasers into the brain of C. elegans, but couldn't answer Leifer's question because they required restraining the worms

in some way to hit the correct spot in the brain. Leifer's system allowed him to hit a moving target, and thus allowed his study to become the first to zap the neurons of free-moving worms.

He and his collaborators were able to show, for example, that during swimming, motor signals move down the body through muscle cells themselves as well as through nerve connections, by selectively blocking sections of its musculature and nervous system. [Scientific American]

Examining the worms this way could let Leifer build an entire behavioral map of their brain cells and connections. And hopefully someday the technique will move to more complex creatures, too. Related Content: 80beats: Star Trek-Style “Phaser” Paralyzes Worms With a UV Blast

80beats: Researchers Flip Brain Cells On and Off With Light Pulses

Not Exactly Rocket Science: Why Have Sex With Someone Else When You Could Do It With Yourself?

What C. elegans has to say about the evolution of sex. Image: Leifer et. al. / Nature Methods (The targeting system, and the worm)