Yutyrannus, a giant tyrannosaur with feathers 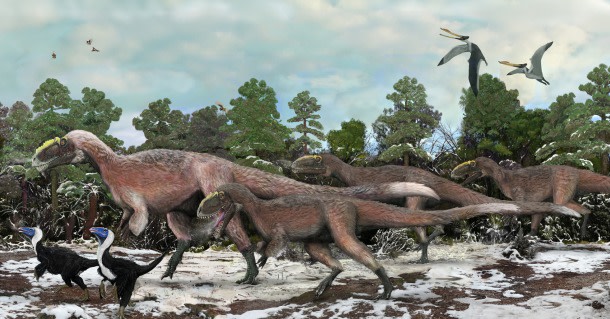 Meet the largest feathered animal in history – an early version of Tyrannosaurus rex, clad in long, fuzzy filaments. This newly discovered beast has been named Yutyrannus huali, a mix of Mandarin and Latin that means “beautiful feathered tyrant”. And its existence re-opens a debate about whether the iconic T.rex might have been covered in feathers. “This is a tremendously important fossil. Paleontologists have been waiting for a gigantic feathered theropod to turn up for some time,” says Lindsay Zanno

from the Field Museum. Larry Witmer

from Ohio University, agrees. “The big thing is the one-two punch of being huge AND feathered,” he says. Yutyrannus was discovered Chinese palaeontologist Xing Xu

, who is no stranger to feathered dinosaurs

. Xu is somewhat of a rock star among dinosaur-hunters. Despite having no initial interest in palaeontology, he has discovered more than 30 species

. These include the four-winged Microraptor

and Guanlong - early tyrannosaurs covered in simple fuzz. Like most other feathered dinosaurs, these animals were small. Dilong was the size of a large dog, and Microraptor the size of a chicken. Yutyrannus breaks that rule. It weighed in at 1,400 kilograms (3,100 pounds), and was at least 7 or 8 metres in length. That’s 40 times bigger than Beipiaosaurus

, the previous record-holder for largest feathered dinosaur (and another Xu discovery). Xu found three skeletons of the new creature in China’s Liaoning Province. Judging by the size and the state of their bones, one of them was an adult, and the others were a decade or so younger. Except for one missing tail, they are almost complete, and in very good condition. That alone is cause for celebration. Dinosaur-hunters are often forced to describe new species based on tantalising fragments from a single skeleton; three complete ones is a jackpot. All three specimens had long 15-centimetre feathers. Each is unevenly covered, but between the three skeletons, it’s likely that Yutyrannus was feathered from head to toe. These aren’t the flattened vanes that help most modern birds to fly. At this stage of their evolution

, feathers were simply long filaments, better suited for insulation or displaying to peers, and similar to the plumes of today’s flightless emus and cassowaries. 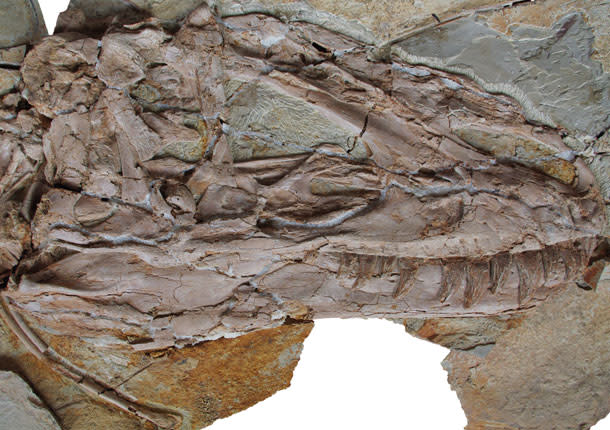 When the tyrannosaurs first appeared on the scene in the middle of the Jurassic period, they were small animals, just over a metre in length and covered in dino-fuzz. “The evidence has been mounting that the big tyrant dinosaurs were descendants of fuzzy dinosaurs, and quite possibly fuzzy themselves,” says Tom Holtz Jr

from the University of Maryland. The tyrants we know and love only appeared at the very end of the Cretaceous. By that time, they had developed many special traits including teeth like “knife-edged bananas

, and massive bone-crushing skulls. And they had lost their feathers, or so we thought. “The assumption has been that T. rex and its gigantic kin were scaly, not feathery, and there is some (rather sketchy) fossil evidence that this might be true,” says Witmer. The idea also made sense because large mammals, like elephants and rhinos, are virtually hairless. Their huge bodies lose heat very slowly, and they don’t need the insulation that their smaller cousins do. If super-sized mammals lost their fur, it stands to reason that super-sized tyrannosaurs lost their feathers. Yutyrannus shows that this isn’t necessarily true. Xu speculates that Yutyrannus’s feathers might have been a winter coat. While most giant tyrannosaurs enjoyed warm climates during the late Cretaceous, Yutyrannus lived at a time when the average yearly temperature was a nippy 10 degrees Celsius. Maybe it was the tyrannosaur equivalent of woolly mammoths and woolly rhinos, whose shaggy coats protected them during the Ice Age. “The idea of woolly tyrannosaurs stalking colder climates in the Cretaceous is kinda mind-blowing,” says Witmer. So could T.rex also have been covered in feathers? Paul Sereno from the University of Chicago thinks so. “In my lab, I have a T. rex fossil that shows the beast did not have scales,” he says. “But it’s only in China that we have the opportunity to see evidence of what replaced scales – feathers! The report is a red flag to Hollywood and some scientists who get wobbly legs thinking something as ferocious as T. rex might have been packaged with a soft downy overcoat. You’ll now be able to date any Hollywood film that does not give these brutes their feathery due!” Admittedly, there’s no direct evidence for a feathery T.rex yet. “[Yutyrannus] doesn't put the nail in the coffin on the debate over the body covering of T.rex, but it definitely weakens the argument that the tyrant-king couldn't have had feathers,” says Zanno. The problem is that none of the large tyrants was found in the right conditions. “Most T. rex skeletons were found buried in sandstone or siltstone. Both sand and silt are too coarse to record the presence of feathers even when they are there,” says Holtz. “But Yutyrannus was found in extremely fine sediments derived from volcanic ash and deposited in very still water: the perfect condition for preserving feathers.” Perhaps somewhere, there’s a fuzzy T.rex that died in just the right conditions and is waiting to be found Reference: Xu, Wang, Zhang, Ma, Zing, Sullivan, Hu, Cheng & Wang. 2012. A gigantic feathered dinosaur from the Lower Cretaceous of China. Nature http://dx.doi.org/10.1038/nature10906