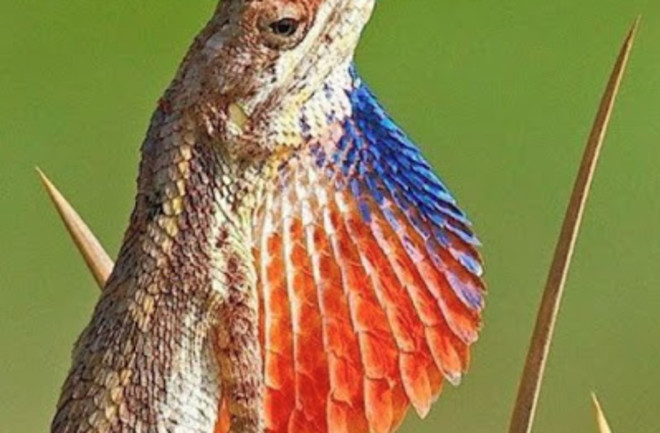 It is my distinct pleasure to welcome Sitana attenboroughii, Attenborough's fan-throated lizard to the world. Measuring somewhere under three inches from snout to vent, the lizard is a welcome addition to the Agamidae family, and bears the "Attenborough" distinction proudly. In lieu of gifts, we are instead asking that you simply be nice to the environment. These little guys live in a fragile habitat.

S. attenboroughii was just described in the January issue of Zootaxa by Indian researchers, so it's about as close to breaking news as this blog is going to get. It hails from Kerala, a state on the southwestern tip of the Indian peninsula, and it's got a striking, red-and-blue crest of skin under its chin called a dewlap

Attenborough's fan-throated lizard sets itself apart with a fairly small, but vibrant, dewlap — a bit of restrained excellence I'm sure Sir David would approve of. The colorful fringe (Dilophosaurus, anyone?), only present in males, is used for communication during the breeding season.

Though researchers haven't decoded the exact signals the dewlap sends, it's a fair guess that it works as both a kind of "hey girl" and "back off, bro" to potential suitors and rival lizards, respectively.

Fan-throated lizards usually live in open environments, and the various species range from mountain plateaus to sandy beaches. S. attenboroughii seems to prefer the combination of sandy dunes and spiny grasses Kerala offers, and it may be the only place they're found, according to the Bangalore Mirror.

Lizards in the genus Sitana snack on insects primarily, though some have been observed making a meal of both mollusks and seeds. Recent work is hinting that there may be many more species within the genus to be discovered — many perhaps found only in specific habitats as S. attenboroughii seems to be.

This family is still growing, though it's likely in peril as well. Human development is encroaching in many places, and fragile microhabitats are often the most vulnerable.

Bonus Attenborough Fact of the Week: Listening to David Attenborough narrate nature documentaries is as good for you as meditation.