The lizards that don't lie. 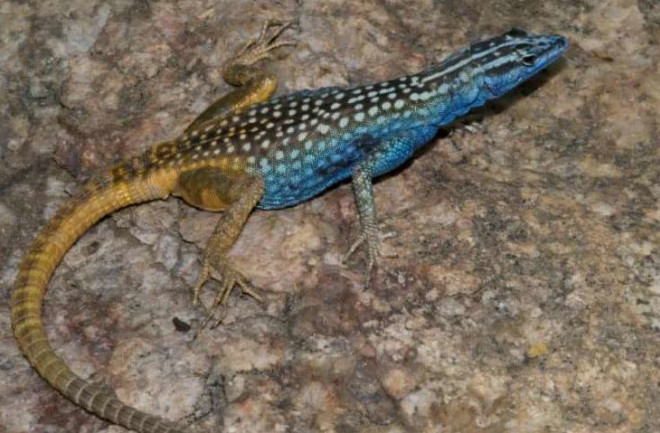 There's a concept in economics that I've always been a bit fascinated by called a Veblen good. The basic idea: A product or service for which demand goes up the more expensive it gets.

It runs totally counter to the normal precepts of economics, but there's a logic to it. For some things, works of fine art, say, or luxury cars, it's not the physical object itself that's desired, but what it represents.

Like Nic Cage buying a dinosaur skull, it's a statement that you can afford to spend money simply for its own sake — an economic power play. The more expensive a Veblen good gets, the more symbolic value is attached to it and it's worth more.

I'm intrigued by the concept because it feels uniquely human — who else but us to revel in such an abstract expression of dominance. But, that's really not true.

The animal kingdom writ large also prizes absurd manifestations of fitness, and we've all seen examples of it strutting about. I'm speaking of peacocks, of course; the garish tails males sport follow their own Veblen-esque logic. The concept here is honest signaling.

Females want to choose the best, most physically superior mate they can so that their babies will grow up big and strong. You obviously can't trust anything the man says, though, so many species have developed signals of fitness that don't lie.

Peacock tails are a prime, though extreme, example. Carrying all that weight around is tough, so only the strongest, most able males can do it. A bigger tail means a more fit mate, even if the very thing that tells you that is absolutely a detriment to his physical abilities.

There's a reason most species haven't gone that route, though. Peacocks are an extreme example — what's called runaway sexual selection— and the net effect is to make the entire species less fit. Peacock tails make sense to a species internally, but try telling that to the tiger leaping from the bushes.

The key is moderation, and for an example of that, let me introduce you to Platysaurus attenboroughi. The species of flat lizards (so-called because you could lay out an exceptionally tiny tea set on their backs) live in South Africa, and they like to hang out in rocky crevices.

They emerge to feed on swarming insects and to sun themselves, and when they do, it's pretty obvious. Male P. attenboroughi have undersides colored a vibrant blue, and if we could see in the UV spectrum, they'd be even more impressive — the lizards have patches of skin under their throats that reflect UV clearly.

These patches serve as an honest signal of their fighting ability, because producing the UV-reflective patch takes some amount of extra effort for the lizards. The stronger lizards can produce better patches, and they're the ones that win the fights and get the mates — it's the same mechanism that peacocks use.

The patches themselves are purely cosmetic: In a similar species, researchers found that dimming the patches artificially caused the lizards to get picked on more often because they appeared weak. The patches didn't affect the outcome of the fight, it's just that they're normally a reliable signal of how easy a given lizard might be to beat up.

As should be obvious by now, looks do matter sometimes.

Ultimately, veblen goods always seemed a bit silly to me — why spend millions on something to show off when you could simply realign your preferences to get the same amount of happiness from something much simpler?

P. attenboroughi gets the same utility that peacocks do, but with far fewer resources, and I, for one, applaud their biological economy. Granted, I've never been rich, either, and peacocks haven't gone extinct yet, so maybe they're on to something. But would you really want to be one?