The very pitcher of perfection. 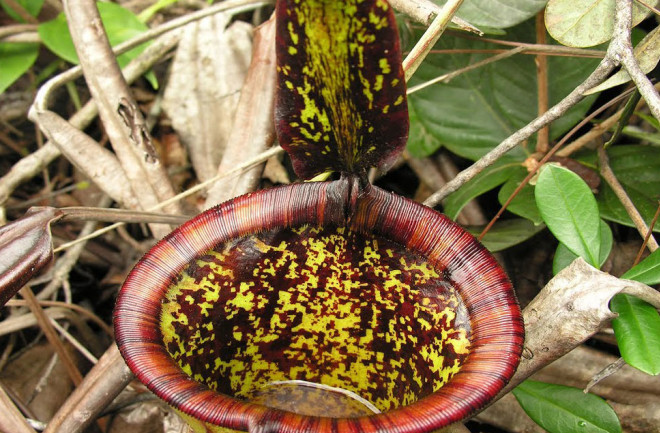 Oh, to be a pitcher plant. Unlike most of the animal kingdom, who run around chasing money, antelopes, Twitter mentions and whatnot, pitcher plants just sit there and let it all come to them.

It's like being inside one of those money booth things with dollar bills flying around and just letting them stick to your face. It's not a lifestyle for everyone, of course, but if these guys can make it work, there's hope for the rest of us. I mean, they live on a freaking mountain for Chrissakes.

Nepenthes attenboroughii is one of the largest pitcher plant species in the world. The characteristic bells it uses to both trap and digest interlopers have been found to measure up to 1.5 liters in volume, and the plant's stem can reach heights of one and a half meters (or about five feet).

They're so big, in fact, that when they were discovered in 2009 by a British botanist, some news reports pegged them as "rat-eating" pitcher plants. Though that was a bit of an exaggeration, researchers later observed a shrew that had fallen into a pitcher and watched as it was slowly digested over the course of a couple of months. So, mammal-eating, yes, but until it starts shouting "Feed me!" I wouldn't worry too much.

Similar to other plants in the Nepenthes genus, the pitcher begins as a normal-looking leaf. This leaf sprouts a small tendril, which gradually lengthens and swells into a giant chamber filled with digestive juices. A bit of nectar draws insects in, and the waxy coating covering the leaves ensures they slip and slide but rarely escape.

Like most pitcher plants, N. attenboroughii digests its guests right in the pitcher it uses to trap them. The bottom third or so is filled with a milky, viscous liquid that probably serves to help break down prey, and the top is usually filled with water from rainfall. The pitchers are big enough, in fact, that mosquitos will often lay eggs on the surface of the water there, and the bits and pieces of detritus that fall down likely help sustain the plant as well.

The pitcher plants are pretty hardy fellows, too. Their native habitat is the top of a single mountain in the Philippines, almost a mile above sea level, in rocky soil that's inhospitable to most plants. N. attenboroughii's carnivorous tendencies are likely what let it survive in the harsh conditions.

I couldn't find much from Sir Attenborough regarding this particular species, but he did film a bit a few years ago on another giant carnivorous pitcher plant in the region that also happens to inhabit its own mountain, Nepenthes rajah. Listen in for a much better description of pitcher plants than I wrote and some truly creepy sped-up footage of a pitcher plant as it manifests its poisonous traps.

Bonus Attenborough Fact of the Week: It's not just species — "Boaty McBoatface" ended up being named the "RSS Sir David Attenborough"