The one with a clever name. 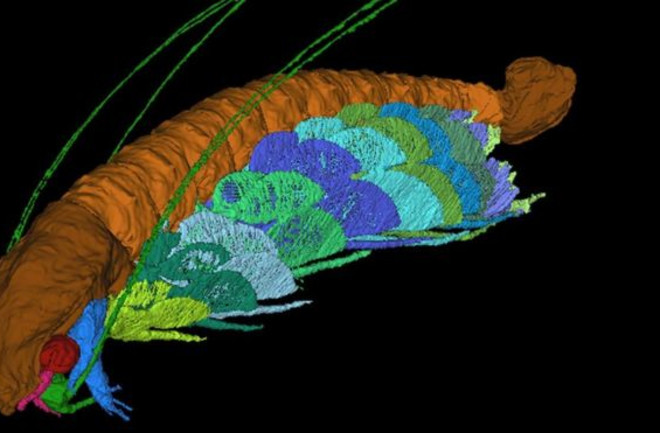 Let's think about what a fossil really is. A creature turned to rock, right? For the lucky few that get immortalized (or nearly) by geology and chemistry, hard tissues slip away as minerals take their place, molecule by molecule.

The ancient dinosaur, or crustacean or plant is wiped entirely from the face of the Earth, and in its place is a kind of negative image. Negative, I suppose, in the sense that rock has replaced what once was living, breathing tissue, but also because the soft parts leave their own mark on the world.

Soft tissues don't get preserved, even as rock (except in some rare cases), but they do show up in the fossil record, sometimes in exquisite detail. From feather vanes to leaf veins, structures so delicate they would tear in your hands imprint themselves as geology.

But, it's nothing more than a memory, a marker of the space those tissues once occupied.

When it comes to the hard parts, the story's a bit different. In some cases, a process called permineralization occurs involving mineral crystals that seep through cell walls and replace the inner workings of the cell entirely. It leaves an exquisite structure, but it's just a shell, down to the cellular level.

When they were naming a crustacean discovered in volcanic rock, researchers from Great Britain did a similar sort of swap. The small shrimp ancestor they found is well-preserved enough that they were able to make a 3-D model of its body, based both on the fossilized tissues that remained the impressions in the rock. It had five pairs of legs and long antenna-like structures sweeping back from its head. In all, it was only about a centimeter long.

The researchers named it after David Attenborough, of course, but they bucked tradition a bit. Cascolus ravitis doesn't seem like it should fit in this series, at first glimpse. But, it's actually a slick piece of etymological handiwork. "Cascolus" is a portmanteau of two Latin words, castrum, or stronghold, and colus, which means "dwelling in". The name "Attenborough" is itself composed of two root words — "borough," related to "burgh" which means "fortified place," and "atten," translated as "at the."

So, Attenborough and Cascolus come out to mean roughly the same thing when traced back to their roots. Ravitis, too, is more clever than it seems. It's actually three words smushed together — "ratae," Roman for Leicester, where David is from, "vita," for life, which Attenborough certainly loves in all its forms, and "commeatis," a messenger, which really speaks for itself.

In all, I'm giving them two awards: most ingenious David Attenborough species and most annoying to explain. Take it or leave it

Bonus Attenborough Fact of the Week: David Attenborough is, in part, responsible for bringing Monty Python's Flying Circus to the world.