Your Weekly Attenborough: Bonus Round 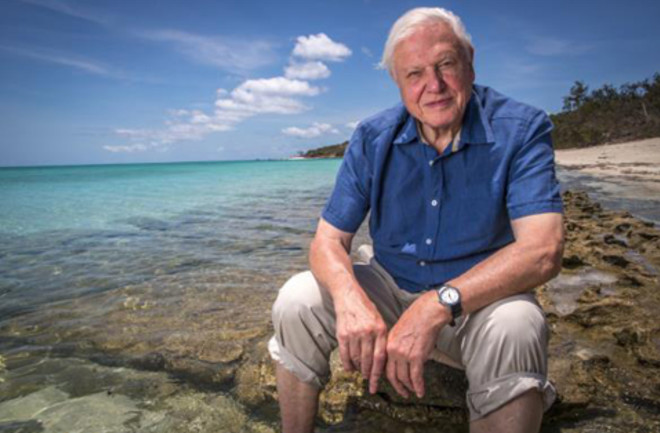 At my current count, there are at least 30 species named after David Attenborough. That's a ton. 23 posts in and I'm feeling the pinch, I'm not going to lie.

Sometimes there just isn't enough information to put together a decent post, so I'm going to take a bit of a cop-out here. Instead of one species, today we're gonna do five.

In this super-special edition of Your Weekly Attenborough we're gonna journey back to the Cretaceous to meet a wasp, dip under the water in Brazil to shake claws with a crab, check out a beetle (that's all I got for that one, sorry) and much, much more.

And though I've done my best to scroll through as many pages of Google Scholar as possible, I'm open to the possibility that I may have missed a microbe here or a fossilized plant there. If you've got a hot tip on a fresh Attenborough, just hit up my Twitter and I'll add them to the list.

So, on to the main event! Here are your weekly Attenborough(s):

First up is Diversinitus attenboroughi,  a species of jewel wasp found in amber. It dates to the Cretaceous, AKA the last of the dinosaur periods, and it's cool because it's a much more basal example of a type of wasp that's pretty species-rich today.

The superfamily Chalcidoidea, which the jewel wasps belong to, has over 22,000 known species, many of which are parasitic. This guy is probably an ancestor to a whole bunch of species spread all around the world today

I like to imagine all those different species hiding inside D. attenboroughi, awaiting the perfect confluence of environment and genetics that will bring them to life. But maybe that's weird?

Second on our list today: Kingsleya attenboroughi. It's a freshwater crab from Brazil that likes to frequent shallow seasonal streams in the country's northeastern region. The crabs mostly hunt at night, spending their days hidden under rocks to keep safe.

I can't say much else about these guys, except to add that crabs actually frighten me a good bit. I've got a perpetual fear of being nipped by crab claws when standing in the ocean, which actually isn't that big of a risk, come to think of it. Not sure why they're scary, though it could be because they look like bony spiders.

Less frightening is Corita attenboroughi, a species of concealer moth from central Chile. They're small and like to eat dead plants, and that's about all the useful information I could find on them.

The Wikipedia article on the family they belong to deals mostly with what a taxonomic mess said family is. The researcher did tell me, though, that he discovered this particular species right by his house in Chile, though he still hasn't been able to gather much more data on them. Sometimes those closest to us are the most mysterious.

Next up is Micridium attenboroughi, a type of beetle. The only info on these guys is a Wikipedia page in German, and my fluency in the language peaked in fifth grade, unfortunately.

From what I can make out, Micridium have shiny, light-colored bodies and ramming hips (German, amiright?) on their forelegs that help to differentiate them from other genera. Entschuldigung liebe leser.

Of a bit more interest might be Agapornis attenboroughi, a species of Pleistocene parrot from South Africa. Along with another species discovered at the same time, they're the earliest evidence for parrots in the region. They probably fed on grass, which reinforces theories about the ecology of South Africa at that time, which is assumed to have been a mix of grassland and woodland.

A. attenboroughi is smaller than any other member of its genus, and remains have been found at sites also containing bones of early human ancestors. Whether they were trying to teach them to say "Hello!" as well is doubtful.

Finally, in the interest of being thorough, I'll mention Oedura attenboroughi, a species of velvet gecko that seem to have briefly been honored with the Attenborough name in 1985, only to be lumped back into another, less noteworthy species later on. Sorry buddy.