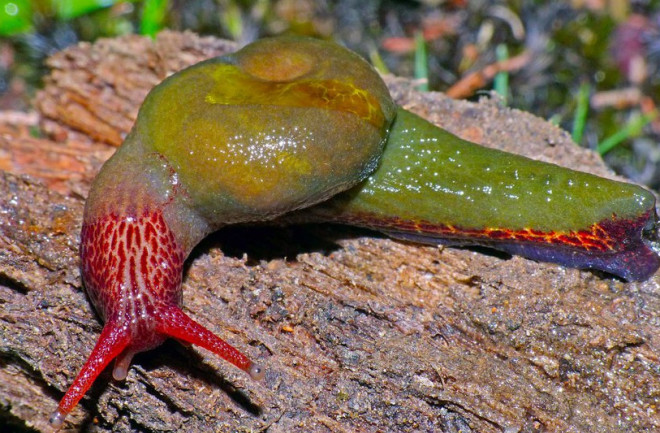 If you're like me, your family's Christmas tree is dripping with poorly-made ornaments you and your siblings slapped together in kindergarten. Seriously, one is just a picture of me with some spray-painted puzzle pieces around it.

If you're lucky enough to live in a small part of Australia, though, you could probably gussy your tree up this year with a festive snail. (Disclaimer: This is a bad idea and will get you in a lot of trouble.)

Attenborougharion rubicundus is a snail from the island of Tasmania, which lies a bit southeast of the main continent. Its most famous residents are, of course, Sarcophilus harrisii, but these snails deserve an honorable mention, if only because they're so darn festive.

This cheery little guy comes decked out in red and green and was classified only this year as a distinct genus. A. rubicundus was discovered back in 1978, but looked so similar to other snails on the island that researchers weren't able to tell it apart till now.

What they think happened was a classic example of convergent evolution. Species that once looked pretty different can began to evolve similar traits because they experienced the same environmental pressures, and Attenborough's snail ended up looking just like other snail genera on the island.

And the evolution continues — the snail is actually considered a semi-slug given that its shell is slowly disappearing. Shells trade agility for protection, and A. rubicundus seems to have had second thoughts about carrying its home on its back all of the time.

Their shells are still there, but are extremely thin and brittle, and will likely only continue to fade. Don't wait on them, though, it'll probably be another few million years before it happens.

Sir David himself was reportedly happy to hear of the honor, which came as he was made a Lifetime Patron of the Australian Museum — its highest honor.

"So Attenborougharion rubicundus will be on my wall for a long time to come, and I accept it with the greatest of pleasure and my utmost thanks to you all," he said in a statement.

Happy holidays to you, David Attenborough! I hope your year is filled with peace, happiness, and lots of nature.