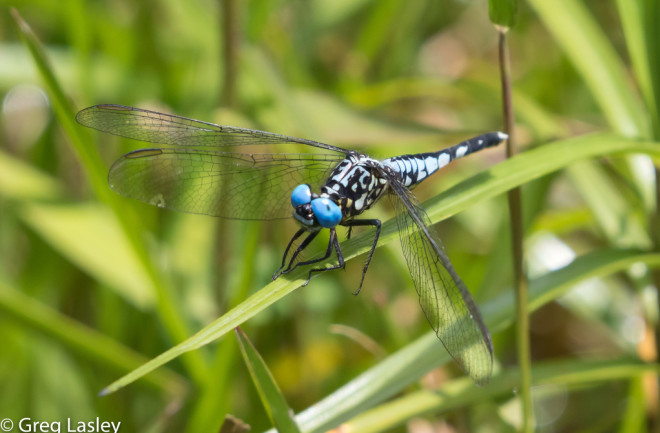 Klaas-Douwe Dijkstra is no stranger to new insects.

The prolific odonatologist has dozens to his name, thanks in large part to a sweeping 2015 paper cataloguing the results of 15 years of work in Africa. That effort added 60 dragonflies and damselflies to the scientific record, and was met with general acclaim from critics.

Most people would be content to coast on the success of a mainstream breakthrough, but Dijkstra returned just months later, dropping a brand new, albeit smaller, collection of species.

Drawing on his work with the Acisoma genus, "Six, not two, species of Acisoma pintail dragonfly," functions as a fitting postscript to his exhaustive magnum opus. Such a move isn't uncommon — follow up a celebrated release with a sampling of B-sides and species that didn't quite make the cut the first time around.

But Dijkstra wasn't hoping to please just a few hard-core fans with his latest. The newest addition to his oeuvre is actually a fitting tribute to one of Dijkstra's clear influences — the legendary naturalist Sir David Attenborough. In an overt homage, he's named the paper's centerpiece Acisoma attenboroughi.

The pintail is the clear standout here: A breathtaking blue sheen dominates, interspersed with eye-popping black. The overall effect is pleasing and unabashedly modern, a welcome stance in a family that tends towards iridescent maximalism.

While the species bears an obvious debt to classic Odanata, A. attenboroughi offers just enough in the way of subtle tweaks to delight even jaded viewers and offers an intriguing look at a little-explored genus.

Though A. attenboroughi could be found in collections dating back to the 1800s, Dijkstra and a co-author were the first to confirm its status as a separate species, using a DNA analysis to back their conclusions.

It's a reminder that novelty can often be found in the most mundane places, a theme that resurfaces multiple times throughout Dijkstra's catalogue. The species is found only in Madagascar, though it's quite common there.

The discovery marks a pleasing turn for a field often characterized by rare or otherwise inaccessible species, though it's not surprising for Dijkstra, whose past work has featured multiple collaborations between scientists and amateur enthusiasts.

The obvious question here is why Dijkstra chose to unveil A. attenboroughi as a separate release, rather than including it with "sixty dragonflies." While A. attenboroughi may stray somewhat from the themes he explored in that paper, it's arguable whether the species is distinct enough to justify the move.

In a Nature op-ed, Dijkstra explains his decision: "One of the greatest naturalists of all is not a scholar in the traditional sense, but a broadcaster. To mark the 90th birthday on 8 May of documentary pioneer David Attenborough, I was given the honour of naming a new species of dragonfly — his favourite insect — for him."

Visually striking and oddly affecting, A. attenboroughi is a welcome addition to the Odanata order and the growing cadre of Attenboroughs. It can be found on Madagascar, the paper was published by the journal Zootaxa.

Rating: 4 stars (or 8.2 if you're using the Pitchfork scale)

Bonus Attenborough Fact of the Week: Turning the tables: The documentary host has also been the subject of multiple documentaries himself.