Your Face Mites Are Family Heirlooms 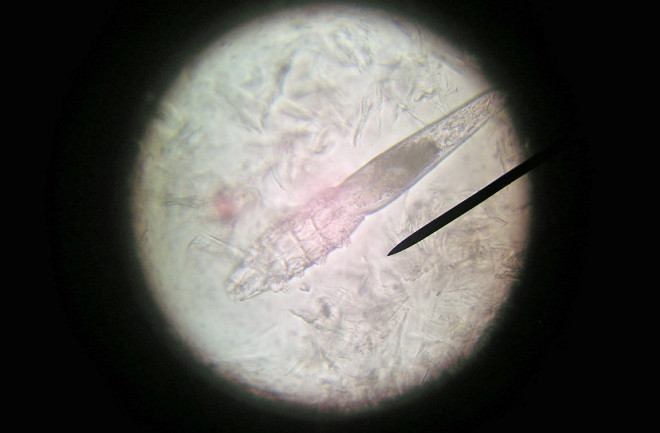 A Demodex mite under 100x magnification. (bill rix/Flickr) Please don’t want panic, but there’s something crawling on your face. Thousands of them actually, and they’ve been there your entire life. “They” are part of the species

known commonly as face mites, and are eight-legged arthropods that live in your hair follicles and snack on dead skin cells. Thankfully, our mites go about their business unnoticed, but not by Michelle Trautwein. She and a group of researchers at Bowdoin College and the California Academy of Sciences have been analyzing the DNA of the Demodex folliculorum mite, because our mites have a long story to tell about human history. Trautwein's team discovered that as humanity spread across the planet, our mite friends have been right there with us, carried from generation to generation and place to place, eventually evolving alongside us to the point where distinct lineages of face mites emerged for different ethnicities.

Getting to Know Our Face Mites

Her team collected mite samples from 70 individuals from a range of ethnicities and countries and found that they could break mites into four separate lineages based on subtle differences in their DNA. Distinct strains corresponding to Africa, Asia, Latin America and Europe emerged from their research.

A graphic showing the distribution of the four lineages of mites across the world. D corresponds to European ancestry. (Credit: Palopoli et al.) The researchers also traced face mite lineages to a common ancestor roughly 3 million years ago by taking the known rate of arthropod evolution and working backward until a shared forebear was found. This timeframe coincided with the appearance of the Homo genus, meaning these mites and our evolutionary ancestors likely arose at the same time. Another key finding was that a person's face mites will remain distinctive to the place they grew up, even after years, or generations, in a different country. In other words, your face mites were passed down to you through your ancestors. Trautwein thinks this is because we inherit our face mites through the type of close physical contact usually shared only by family members. Trautwein's research also indicates that different strains of mites may have evolved and adapted to thrive in their host's unique, facial ecosystem. African mites, for example, would find it more difficult to survive on a person of Latin American descent. This living record makes it more likely that different strains of mites will stay with their hosts, strengthening the idea that a person's ancestry can be determined by examining the genetic makeup of their mite hitchhikers.The team published its findings Monday in the

As they compared mite DNA to human geographic distribution, the researchers found that the African and Asian strains were the most similar in terms of DNA, consistent with the accepted theory that humans originated in Africa and migrated outward. They also found that the European mites were the most widespread, and could be found on people from all over the world. This is likely the result of European expansion over the past few centuries, as face mites hitched a ride on the faces of settlers. Trautwein hopes to use this information to further map the spread of humanity across the globe. By looking for similarities in the mites' DNA and comparing them with the geographic distribution of the different lineages, she hopes that they will be able to pinpoint when and where human populations diverged. Oh, the stories you and your mites could tell.