Your Behavior in Starbucks, and the Link to Your Ancestors 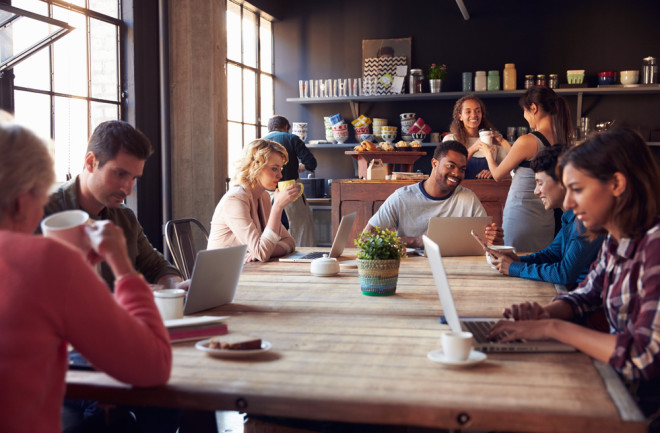 Do the lives of our ancestors still determine how we act today? That’s the question at hand in a new study by U.S. and Chinese researchers, and they come up with an interesting means of testing the question.

To test whether individualistic and cooperative tendencies learned centuries ago live on in descendants of Chinese farmers today, the scientists looked to a common denominator of modern life today: Starbucks. And they set up a situation that anyone who’s visited a crowded coffee shop is familiar with — navigating through a maze of tightly packed chairs to find a seat. What they were looking for was simple: Would Starbucks customers move the chairs aside to clear a path, or would they try to contort their bodies to fit through a narrow space without disturbing the environment?

And, looking at 678 people in six Chinese cities, the researchers say they found some interesting results. People from northern China were three times more likely to move the chairs than those from southern China, they say, and the researchers interpret this as evidence that the northerners are more independent than people in the south. It’s a sign, they say, that the traditional farming techniques each region relied on impressed cultural norms so deeply upon them that the habits still show up in their descendants today. If the findings are borne out by further research it would be a powerful testament to the lasting influence of our ancestral heritage.

There’s certainly an intuitive logic to it. In northern China, people traditionally farmed wheat, and in southern China the crop of choice was rice. Rice is harder to grow than wheat, and it relies on the use complex irrigation systems. The end result is that rice farmers had to form an interdependent society to maintain the infrastructure and labor pool necessary to grow their staple crop. Wheat farmers, by contrast, could get by without help from their neighbors, and that created  a more independent culture.

It’s easy to see that culture is something we inherit from our ancestors — no single generation simply makes up an entire culture all by itself. And, depending on the society, cultural practices can go back centuries. It’s not a stretch to imagine that cultural practices like independence or cooperation learned centuries ago would remain relevant today.

Of course, in our world today, cultural norms are being upended at an unprecedented rate. Technology accelerates change, and society seems to shift almost from year to year as we become increasingly modernized. That’s where the researchers noticed something interesting. Modernization itself didn’t seem to be the driving force behind people’s decision to move the chairs or not. While more modern societies are normally assumed to be more independent; more wealthy, technologically advanced cities in China aren’t necessarily more individualistic, the researchers say — at least by their Starbucks metric. Even in modern cities in the south, people weren’t very likely to move the chairs.

That’s where their hypothesis about the sticking power of ancestral norms comes in. In China, perhaps it’s not modernity making people more individualistic, they say. Instead, it could be ancestral farming traditions.

It’s intriguing, but this study deserves a healthy dose of skepticism. In large part, this is for reasons most of you will probably have already guessed — in a real-world situation like a busy cafe, there are so many confounding variables at work that it’s difficult to eliminate them all. The researchers do attempt to address many of these variables. In their paper, they control for things like age, gender, level of modernization, time of day, whether they were alone and even the pathogen levels in the city. They also conducted a survey of Starbucks customers, though not necessarily the same ones moving through the chairs, to see that they were indeed from the region the Starbucks was in, or were at least longtime residents — over 90 percent said they were.

The researchers also did a second study that looked at whether people in Starbucks were more likely to sit together or alone, again controlling for many of the same variables, and got results that lined up with their findings in the chair-moving study. People in the nominally more independent north of China were more likely to sit alone. They also conducted a chair-moving test in Japan and the New York City. People in NYC were more likely to move the chair than anywhere else, they found, while people in Japan, which also has a rice-farming history, were about as likely to move the chair as they were in southern China.

Altogether, it adds up to ample evidence that agricultural traditions can affect people’s behavior for generations to come, they argue. But there are many other factors that could be at work. As Dennis Normile, a reporter for Science, pointed out in a press conference, they didn’t look to see whether people were carrying drinks or bags, something that could influence their decision to move a chair aside or not. Other factors like how crowded the cafes were, where in the city the Starbucks was located, and where in the restaurant the chairs were placed could also affect people’s behavior as well.

Something to Think About

“I don’t disagree with the researcher’s conclusions, but the evidence does not seem very strong to me,” says George Loewenstein, a professor of psychology and economics at Carnegie Mellon University not affiliated with the study. “I suspect there are differences between north and south that are not connected to which crops dominated. Northern and southern parts of many countries – the U.S., Germany, Italy, the U.K. – differ dramatically, and it seems unlikely that these differences generally reflect differences in crop cultures between north and south.”

Though the potential for confounding variables is certainly significant, study author Thomas Talhelm, an assistant professor of behavioral science at the University of Chicago’s Booth School of Business, says his team’s work nevertheless reveals important insights.

“I think it’s quite a strong demonstration to take people who are Starbucks and measure these differences.” Talhelm says. “Before this study, if I had said, I’m going to measure people in China and we’re going to test for rice wheat differences, and oh by the way I’m going to test people in Starbucks — I think people would say that’s probably the least likely situation where we would find differences. I think that speaks to — in a vivid way — about these agricultural legacies can persist into the modern world.”

He acknowledges that the research has some shortcomings, but Talhelm believes that he and his team were able to eliminate enough confounding variables to produce relevant results, especially given that his work agrees with previous research he’s done looking at cultural differences between northern and southern China.

In all, it’s food for thought, if nothing else. Looking back to our ancestors, and the lives they lived, could very well offer some insights into our current situation. Were your forebears farmers? Herders? Civilians of a sprawling civilization or inhabitants of a small village? The cultural patterns they participated in and passed on might very well be living on in you today.