Young Infants Have No Clue Who's Tickling Their Feet 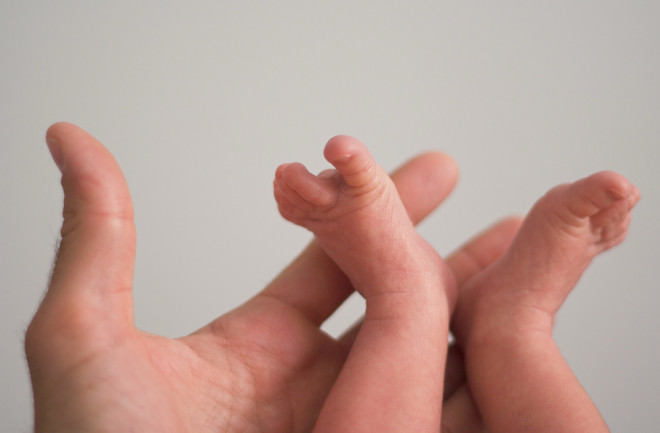 (Credit: Patrick Lecarpentier/Shutterstock) For a newborn baby emerging from the cozy womb, the outside world is much bigger, much colder and quite a different kind of place. At birth, the way newborn babies sense their environment changes dramatically. How do they make sense of all the new sounds, sights, smells and sensations? Our new research has focused on the way babies experience touch, such as tickling. We’ve found that young infants of four months old, unlike older infants, are pretty accurate at locating where they’ve been tickled, even with their limbs crossed. In the womb there is a constant chain of tactile sensations occurring for the fetus to feel, but those touches might be experienced as rather lonely events, unrelated to the low-resolution sights, and the gurgling low-frequency noises of the womb. In the outside world, the environment becomes much more multisensory. The tactile feeling of being picked up is likely to accompanied by sights such as a parent’s face or hands, and the sounds of voices. We don’t fully understand yet how infants link these kinds of sensory stimuli, and how long it takes them to figure out the way what they feel and what they see or hear fits together.

Where’s That Coming From?

Our research at the Goldsmiths InfantLab has been investigating the early development of tactile perception for some time, looking particularly at the early development of how babies perceive where a touch is coming from in space. Typically, we present little tactile buzzes to babies' hands, one hand at a time, and in a random order so that the baby does not know where to expect them. The touches – which are like a little tickle – are delivered by what we call voice-coil tactors, small vibrating boxes which we wrap into the palms of the babies' hands. When a buzz is presented there is nothing going on visually to indicate which hand received the touch. Any noises made by the tactors are masked so that the infants cannot tell where they are coming from. In order to figure out what the babies can do, we look at video records of the infants' movements. We measure whether they can accurately localize those buzzes, by moving their hands or moving their eyes towards the location of the tactile stimulus. One of our most striking early findings was that babies do not often look towards touches. Comparing six-month-old and ten-month-old babies, we found that whereas the older infants made eye and head movements quite quickly and accurately to the hand where they had felt a touch, the younger ones tended to make many fewer and less of such movements. It was as if they did not yet know how the visual world matched up to the tactile world of the body.

Figuring Out the Outside World

Our most recent findings have looked in more detail at the question of whether babies perceive where a touch might be, not just on their body but in the outside world. One signature of this ability is a tendency, demonstrated by both young children and adults, to become confused about the location of a touch when our limbs are crossed over. As we grow up, we learn from experience that our bodies and limbs tend to rest in particular places. For instance, we come to expect that our left hand is usually in our left field of vision, and our right hand is usually in the right field of vision. We also expect touches to our right hand to have originated from events to the right of us. However, if our hands are crossed, our left hand and the touches it feels are in right space, and our right hand and the touches it feels are in left space. This therefore confounds our expectations leading us into errors. But if young infants haven’t learned to localize touches in the outside world yet, they should make fewer mistakes than older infants when their hands are crossed. We tested this in four- and six-month-old babies – this time placing buzzes on babies' feet rather than their hands. (Four month olds seemed quite unwilling to cross their hands over.) The six month olds were quite good at localizing touches when their feet were uncrossed. About 70% of the time, they moved the foot which had been touched. When their legs were crossed, their performance dropped to 51% – chance. But the young four month olds got the correct foot about 70% of the time – both when their legs were crossed and uncrossed. They did not seem to care which side of their bodies their feet were, simply responding to a tactile location on the body, and at a good level of accuracy to boot. On the basis of this we argue that before six months of age, when a baby feels a touch on their foot or their hand, they don’t relate the touch to an object or event outside of themselves. They just feel the touch as a touch on their body and that’s all. We’re calling this “tactile solipsism”. To me this idea of what it would be like to be a baby feeling a touch is quite strikingly different to our own realities – if we’re right – it must be strange being a newborn baby.